The newest astronomical instrument at the La Silla observatory is a super-camera with no less than sixty-seven million image elements. It represents the outcome of a joint project between the European Southern Observatory (ESO), the Max-Planck-Institut für Astronomie (MPI-A) in Heidelberg (Germany) and the Osservatorio Astronomico di Capodimonte (OAC) near Naples (Italy), and was installed at the 2.2-m MPG/ESO telescope in December 1998. Following careful adjustment and testing, it has now produced the first spectacular test images.

With a field size larger than the Full Moon, the new digital Wide Field Imager is able to obtain detailed views of extended celestial objects to very faint magnitudes. It is the first of a new generation of survey facilities at ESO with which a variety of large-scale searches will soon be made over extended regions of the southern sky.

These programmes will lead to the discovery of particularly interesting and unusual (rare) celestial objects that may then be studied with large telescopes like the VLT at Paranal. This will in turn allow astronomers to penetrate deeper and deeper into the many secrets of the Universe.

The larger a telescope is, the more light - and hence information about the Universe and its constituents - it can collect. This simple truth represents the main reason for building ESO's Very Large Telescope (VLT) at the Paranal Observatory.

However, the information-gathering power of astronomical equipment can also be increased by using a larger detector with more image elements (pixels) , thus permitting the simultaneous recording of images of larger sky fields (or more details in the same field). It is for similar reasons that many professional photographers prefer larger-format cameras and/or wide-angle lenses to the more conventional ones.

The Wide Field Imager at the 2.2-m telescope

Because of technological limitations, the sizes of detectors most commonly in use in optical astronomical instruments - the "Charge-Coupled Devices (CCD's)" - are currently restricted to about 4000 x 4000 pixels. For the time being, the only possible way towards even larger detector areas is by assembling mosaics of CCD's.

ESO , MPI-A and OAC have therefore undertaken a joint project to build a new and large astronomical camera with a mosaic of CCD's. This new Wide Field Imager (WFI) comprises eight CCD's with high sensitivity from the ultraviolet to the infrared spectral domain, each with 2046 x 4098 pixels. Mounted behind an advanced optical system at the Cassegrain focus of the 2.2-m telescope of the Max-Planck-Gesellschaft (MPG) at ESO's La Silla Observatory in Chile, the combined 8184 x 8196 = 67,076,064 pixels cover a square field-of-view with an edge of more than half a degree (over 30 arcmin) [1].

Compared to the viewing field of the human eye, this may still appear small, but in the domain of astronomical instrumentation, it is indeed a large step forward. For comparison, the largest field-of-view with the FORS1 instrument at the VLT is about 7 arcmin. Moreover, the level of detail detectable with the WFI (theoretical image sharpness) exceeds what is possible with the naked eye by a factor of about 10,000.

The WFI project was completed in only two years in response to a recommendation to ESO by the "La Silla 2000" Working Group and the Scientific-Technical Committee (STC) to offer this type of instrument to the community. The MPI-A proposed to build such an instrument for the MPG/ESO 2.2-m telescope and a joint project was soon established. A team of astronomers from the three institutions is responsible for the initial work with the WFI at La Silla.

A few other Cameras of this size are available, e.g. at Hawaii, Kitt Peak (USA) and Cerro Tololo (Chile), but this is the first time that a telescope this large has been fully dedicated to wide-field imaging with an 8kx8k CCD.

Various exposures were obtained during the early tests with the WFI in order to arrive at the optimum adjustment of the camera at the telescope. We show here two of these that illustrate the great potential of this new facility.

The virtues of wide-angle imaging

Wide-angle imaging is one of the most fundamental applications of observational astronomy. Only from (multi-band) observations over large areas of the sky can large-scale structures and rare objects be detected and put in a proper statistical perspective with other objects. Some typical examples of future survey work: very distant quasars and galaxies, clusters of galaxies, small bodies orbiting the Sun, brown dwarfs, low-surface brightness galaxies, peculiar stars, objects with emission-line spectra, gravitational lenses, etc.

Other important applications include the search for supernovae in distant clusters of galaxies and the optical identification of the rapidly fading gamma-ray bursters which are detected by space observatories, but for which only very crude positional determinations are available.

Once "promising objects" have been found and accurately located on the sky by the WFI, the enormous light collecting power of the VLT is then available to study them at much higher spectral and spatial detail and over a much wider range of wavelengths.

In particular, the continuation of the ESO Imaging Survey (EIS) depends heavily on use of the WFI and will identify and classify all objects seen in a number of selected sky fields. The resulting database is made available as a special service to the community for dedicated follow-up work with the VLT.

The advantage of modern digital detectors

Traditionally, wide-field observations were made with Schmidt telescopes which, by means of to special optics, are able to image sharply a field with a diameter of 5-15 deg. These telescopes use photographic plates that, however, detect no more than about 3% of all incoming photons.

In comparison, the photon detecting efficiency of the CCD's in the WFI exceeds 90%. Moreover, these CCD's supply digital data ready for computer analysis, whereas photographic plates must be digitized with a sophisticated scanning engine in a laborious and expensive manner which nevertheless cannot fully extract all the information. The price to be paid, until even larger CCD's become available, is the smaller field. The field, however, will not exceed 1-2 square degrees with the currently planned, new wide-field telescopes.

The entire detector array of the WFI can be read out in only 27 seconds. Since one WFI image contains 0.14 Gbytes of data, this corresponds to the reading of a book at a rate of almost 1000 pages per second! Even for the most powerful PC's presently available, this can be a real challenge.

However, much more remarkable is that FIERA, the high-tech CCD controller developed by ESO engineers, sustains this speed without adding noise or artifacts that exceed the extremely faint signal from the night-sky background on a moonless night at a completely dark site such as La Silla.

In addition to the eight large CCD's of the mosaic, FIERA simultaneously commands a ninth CCD of the same type in which a small window centered on a bright star is read out continuously, up to 2 times every second. The fast-rate measurement of the instantaneous position of the star enables the telescope control system to track very accurately the apparent motion of the observed field in the sky so that the images remain perfectly sharp, even during long exposures.

In terms of bytes, it is expected that the WFI alone will acquire more observational data than all the rest of the La Silla Observatory and the UT1 of the VLT on Paranal together! This impressively illustrates the ever-accelerating pace at which astronomical facilities are developing.

In the meantime, a Dutch/German/Italian consortium is preparing for the construction of the successor to WFI camera. The OmegaCam will have no less than 16,000 x 16,000 pixels and the field-of-view is four times as large, one square degree. It will be attached to the 2.6-m VLT Survey Telescope (VST) to be installed jointly by OAC and ESO on Paranal at the end of the year 2001.

[1] Some technical details of the new camera: The WFI field-of-view measures 0.54 x 0.54 deg 2 (32.4 x 32.4 arcmin 2 ) and the image scale is 0.24 arcsec/pixel. An advanced optical system is indispensible to focus correctly a field of this large size - 0.8 degree diameter - on the flat CCD mosaic (12 x 12 cm 2 ). The WFI achromatic corrector consists of 6 lenses of up to 28 cm diameter and is able to concentrate 80% of the light of a point source into the area of one pixel in a flat focal plane. Up to 50 filters will be permanently mounted in the camera. A unique facility is provided by a set of 26 interference filters which cover the entire optical range from 380 - 930 nm and thus allows a rough analysis of the spectra of the typically 100,000 objects that are recorded in one field of view. The CCD's possess a very high sensitivity to ultraviolet light and the WFI is only the second UV-sensitive wide-field imager in service in the world. The camera mechanics was designed and built at the MPI-A which also provided the filters. 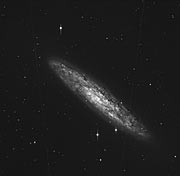 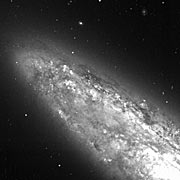 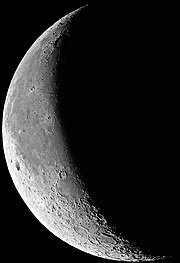 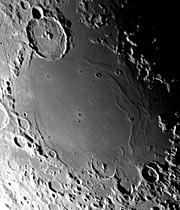 PR Image eso9903e
East of Sinus Iridum
Send us your comments!
Subscribe to receive news from ESO in your language
Accelerated by CDN77
Terms & Conditions