Of Holes in the Sky and Pretty Galaxies

During the continued tests of the two astronomical instruments (FORS1 and ISAAC) at the first VLT 8.2-m Unit Telescope, ANTU (formerly UT1), impressive images have been obtained of a variety of celestial objects. These observations were made through different optical filtres. In some cases, CCD frames could be combined into colour renderings of the objects. We show here some of the new images, obtained with the multi-mode FORS1 instrument shortly before the arrival of the first "visiting astronomers" at Paranal in early April 1999. The first (20a/99) is of a small and nearby, dark cloud, a type of object that has not been imaged before by the VLT, and among the galaxies, the warped dust band in a "Sombrero"-like galaxy is of particular scientific interest. In most cases, the image quality is of the order of 0.6 arcsec.

eso9924a shows an unusual sky field in the Milky Way band. It is centred on one of the classical, dark globules , known as Barnard 68 (B68) after the American astronomer, Edward E. Barnard (1857 - 1923), who included it in a list of such objects, published in 1919. It appears as a compact, opaque and rather sharply defined object against a rich, background star field. Even on this image that registers many faint stars in the area, not a single foreground star is observed. This is a clear sign that this globule must be relatively nearby.

Interstellar clouds consist of gas and dust, including many molecules, some of which contain carbon atoms (i.e. "organic"). For a long time considered to be "holes in the sky", molecular clouds are now known to be among the coolest objects in the Universe (the temperature is approx. 10 K, or -263 °C). Moreover, and most importantly, they are nurseries of stars and planets .

It still remains a mystery how a dark cloud like Barnard 68 at some moment begins to contract and subsequently transforms itself into hydrogen-burning stars. However, deep images of these clouds, such as this one obtained by FORS1 on VLT ANTU, may provide important clues. This small cloud seems to be in its very earliest phase of collapse. It has a diameter of only 7 light-months (approx. 0.2 pc) and it is located at a distance of about 500 light-years (160 pc) towards the southern constellation Ophiuchus (The Serpent-holder).

This three-colour composite was reproduced from one blue (B), one green-yellow (V) and one near-infrared (I) exposure that were obtained with VLT ANTU and FORS1 in the early morning of March 27, 1999. The field measures 6.8x6.8 arcmin 2. The image consists of 2048x2048 pixels, each measuring 0.20 arcsec; the "Full Resolution" version of the photo shows all of these. North is up and East is to the left.

It shows the spectacular barred spiral galaxy NGC 6872 that is shaped like an "integral sign". It is of type SBb and is accompanied by a smaller, interacting galaxy, IC 4970 of type S0 (just above the centre). The bright object to the lower right of the galaxies is a star in the Milky Way whose image has been strongly overexposed and exhibits multiple optical reflections in the telescope and instrument. There are also many other, fainter and more distant galaxies of many different forms in the field. They are particularly well visible on the "Normal" and "Full Resolution" versions of the photo.

The upper left spiral arm of NGC 6872 is significantly disturbed and is populated by a plethora of blueish objects, many of which are star-forming regions. This may have been be caused by a recent passage of IC 4970 through it.

This interesting system is located in the southern constellation Pavo (The Peacock). It is comparatively distant, almost 300 million light-years away. It extends over more than 7 arcmin in the sky and its real size from tip to tip is thus nearly 750,000 light-years. It is in fact one of the largest known, barred spiral galaxies.

In order to image all of this extraordinary object within the available field of the FORS1 camera, the instrument was rotated so that the galaxy extends along the diagonal. For this reason, the orientation is such that North is to the upper right and East is to the upper left.

ESO 269-57 is a spectacular spiral galaxy of symmetrical shape in the southern constellation Centaurus and belongs to a well-known cluster of galaxies seen in this direction. The galaxy received this designation when it was catalogued during the first ESO Survey of the Southern Sky in the 1970's.

eso9924c shows the complex structure of ESO 269-57 , with an inner "ring", of several tightly wound spiral arms, surrounded by two outer ones that appear to split into several branches. Many blue and diffuse objects are visible - most are star-forming regions. The galaxy type is Sa(r). The velocity is just over 3100 km/sec, indicating a distance of about 155 million light-years. It extends over about 4 arcmin in the sky, corresponding to nearly 200,000 light-years across. Many other galaxies are visible in the background.

In this and the other photos, the vertical lines extending from the images of some bright stars result from a "bleeding" effect in the CCD detector where the pixels are completely saturated.

This three-colour composite (BVR) was obtained with VLT ANTU and FORS1 in the morning of March 29, 1999. A bright star in the Milky Way, just outside the field at the upper left, has produced a pattern of blue straylight. The field size is 6.8x6.8 arcmin 2. North is up and East is to the left.

Another photo of this galaxy pair, but with a smaller field size, was obtained with VLT KUEYEN (formerly UT2) and the VLT Test Camera at almost exactly the same time, cf. eso9907.

eso9924e shows a sky field in the southern constellation Hydra (The Water-snake) that includes the peculiar spiral galaxy ESO 510-13 . It ressembles the famous "Sombrero" galaxy, but its equatorial dust plane is pronouncedly warped. The velocity is 3300 km/sec, the distance is about 170 million light-years and the size is 100,000 light-years.

The fact that the dust band and the rest of this galaxy are not well aligned is a clear sign that the former was acquired recently (in astronomical terms). The dust band is still in the process of achieving a more stable state by becoming flat. It is not obvious how it was formed; it may for instance be the result of a merger with a gas-rich dwarf galaxy and the elliptical galaxy. In any case, this is a most interesting object that will undoubtedly soon be studied in more detail, with the VLT and other large telescopes.

The photo displays a very large number of fainter objects near this galaxy. Many of these are likely to be globular clusters of stars associated with the galaxy; others are background galaxies. It would indeed appear that ESO 510-13 is located right in front of one or more, distant clusters of galaxies.

eso9924f is a colour composite (BVR) of a sky field near the border between the southern constellations Carina (The Ship's Keel) and Volans (The Flying Fish). It contains a spiral galaxy, ESO 60-24 that is seen nearly edge-on. This galaxy has a strong equatorial dust band that hides the light from the stars behind it. A bright centre is located just below the dust band and the spiral structure may be perceived in the outer regions. The velocity is 4000 km/sec, corresponding to a distance of about 200 million light-years. 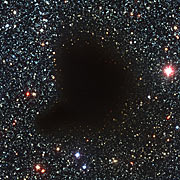 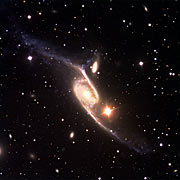 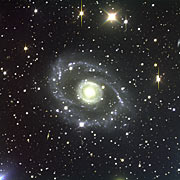 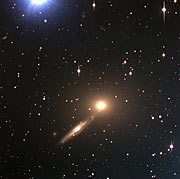 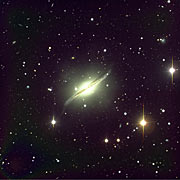 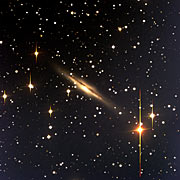