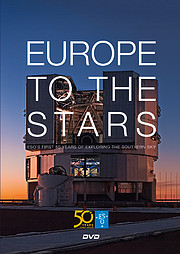 Image ann12070a
Cover of the DVD "Europe to the Stars — ESO’s first 50 years of exploring the southern sky"
Send us your comments!
Subscribe to receive news from ESO in your language
Accelerated by CDN77
Terms & Conditions