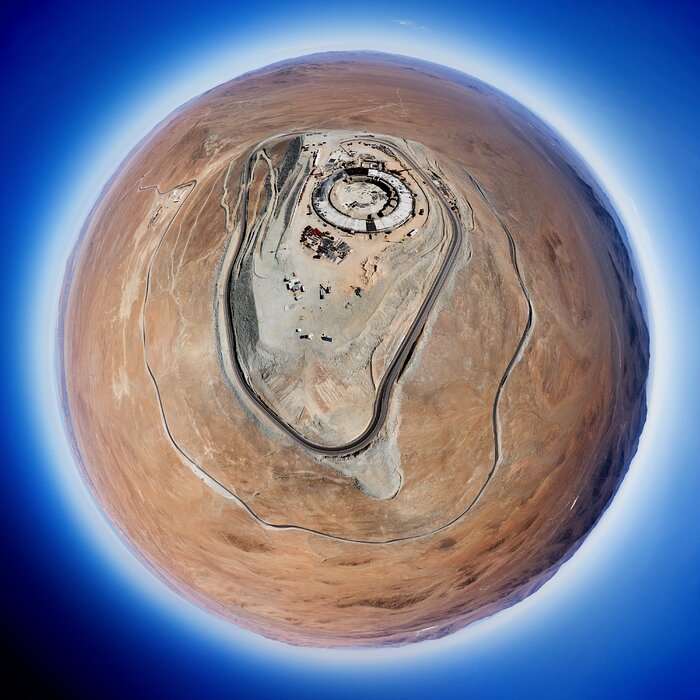 Is that Tatooine with the Millenium Falcon I see? No, in fact this Picture of the Week shows the foundations of the world’s biggest eye on the sky: ESO’s Extremely Large Telescope (ELT)! Currently under construction at the top of Cerro Armazones in the Chilean Atacama Desert, the ELT will begin scientific operations in 2027, and is set to become one of the world's leading astronomical facilities.

This unique spherical picture, taken in January 2022, was constructed using stereographic projection, in which a panorama image is projected onto a single plane. The wraparound shot shows the first hints of the ELT’s large spherical dome, which will house a huge 39 m primary mirror, M1. The mirror is composed of 798 hexagonal segments and will be controlled in real time by a system of high precision sensors to keep them perfectly aligned, a technique called active optics. Another mirror, M4, will deform up to 1000 times per second to correct the effects of atmospheric turbulence. This technology, called adaptive optics, will allow the ELT to take incredibly detailed images of celestial bodies.

The picture also highlights the isolation of the ELT site from the light pollution caused by nearby cities. The Cerro Armazones plateau lies at an altitude of 3000 m, and experiences over 320 cloudless nights a year, making this an ideal spot for observing the cosmos. Curious to see how the construction is progressing? Then check out our webcams!

Other versions of this image: