A Grand Extravaganza of New Stars

This dramatic landscape in the southern constellation of Ara (The Altar) is a treasure trove of celestial objects. Star clusters, emission nebulae and active star-forming regions are just some of the riches observed in this region lying some 4000 light-years from Earth. This beautiful new image is the most detailed view of this part of the sky so far, and was taken using the VLT Survey Telescope at ESO’s Paranal Observatory in Chile.

At the centre of the image is the open star cluster NGC 6193, containing around thirty bright stars and forming the heart of the Ara OB1 association. The two brightest stars are very hot giant stars. Together, they provide the main source of illumination for the nearby emission nebula, the Rim Nebula, or NGC 6188, which is visible to the right of the cluster.

A stellar association is a large grouping of loosely bound stars that have not yet completely drifted away from their initial formation site. OB associations consist largely of very young blue–white stars, which are about 100 000 times brighter than the Sun and between 10 and 50 times more massive.

The Rim Nebula is the prominent wall of dark and bright clouds marking the boundary between an active star-forming region within the molecular cloud, known as RCW 108, and the rest of the association [1]. The area around RCW 108 is made up of mostly hydrogen — the primary ingredient in star formation. Such areas are also known as H II regions.

The ultraviolet radiation and intense stellar wind from the stars of NGC 6193 seem to be driving the next generation of star formation in the surrounding clouds of gas and dust. As cloud fragments collapse they heat up and eventually form new stars.

As the cloud creates new stars, it is simultaneously being eroded by the winds and radiation emitted by previous stars, and by violent supernova explosions. In this way, such star-forming H II regions tend to have a lifespan of just a few million years. Star formation is a very inefficient process, with only around 10% of the available material contributing to the process — the rest is blown off into space.

The Rim Nebula also shows signs of being in the early phase of “pillar formation”, meaning that in the future it could end up looking similar to other well-known star-forming regions, such as the Eagle Nebula (Messier 16, containing the famous Pillars of Creation) and the Cone Nebula (part of NGC 2264).

This single spectacular image was actually created from more than 500 individual pictures taken through four different colour filters with the VLT Survey Telescope. The total exposure time was more than 56 hours. It is the most detailed view of this region yet achieved.

[1] Furthermore, this nebula has additional modest fame among astronomers, as a previous image was used as the cover of the DVD distribution of the collection of software for astronomers assembled by ESO: Scisoft, whose newest version was released a few weeks ago. It is therefore also known as the Scisoft Nebula. 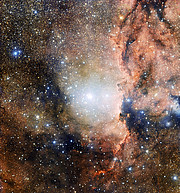 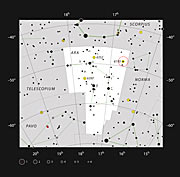 PR Video eso1510b
Close-up view of the star cluster NGC 6193 and nebula NGC 6188
Send us your comments!
Subscribe to receive news from ESO in your language
Accelerated by CDN77
Terms & Conditions