Behind the scenes at ESO: Showing you the road to the stars
What you’ll discover in this blog post:
The detectors used on ESO’s telescopes are among the best in the world, and without them, ESO would not be able to provide the astronomical community with the amazing facilities that it is known for. The development of these detectors is only possible with many years of research and hard work. And here at ESO, it is common knowledge that a lot of this work can be attributed to Gert Finger, known as one of the “fathers” of ESO detectors. In this week’s blog post, Gert shares insights into his career and tells us more about what makes ESO’s detectors so special.

Q: Firstly could you tell us how you became involved in ESO? What was your path to working here?

A: After obtaining my PhD from the Swiss Institute of Technology in Zurich, I was uncertain where to go. I had received an offer from the renowned Bell Labs in the US, but the technical specialist who had assisted me during my PhD had also found a newspaper announcement for a technical position at ESO in Munich. My son said, “Munich, Munich, Munich!” because he wanted me to stay close to him in my home in Austria. I also liked the fact that ESO has never been involved in any military projects. At the time ESO was building the IRSPEC instrument, a spectrometer for the ESO 3.6-metre telescope, which I thought would be really interesting to work on. So because of all of these reasons my final choice was to apply to ESO.

Q: And you’ve worked in the ESO technology department ever since! What kind of roles did you have there?

A: Initially, I was working on the calibration and grating of IRSPEC, but once this instrument was finished I started working on a few other instruments. Slowly but surely I moved more into the detector field, which was challenging as I didn’t start out as a detector specialist at all. Throughout my time at ESO I have worked on almost all the infrared detectors that have gone onto the ESO instrumentation.

The now decommissioned IRSPEC that was used at La Silla Observatory.
Credit: ESO

Detectors are incredibly important because by converting photons of light into an electrical signal, they achieve the final collection of light that allows us to observe the Universe. When I first joined ESO there were two separate detector groups — one working on detectors that collected optical light and the other focused on infrared light. Later on, the two groups merged and eventually I was appointed Head of the Detector Department, which was my position until the end of my career. Upon retirement, I became an emeritus physicist at ESO. So yes indeed, I have spent a lot of my life here at ESO!

Detectors achieve the final collection of light that allows us to observe the Universe.

Q: Within ESO you are known as the “go-to-guy” for information about the ESO detectors. Can you tell us more about them? 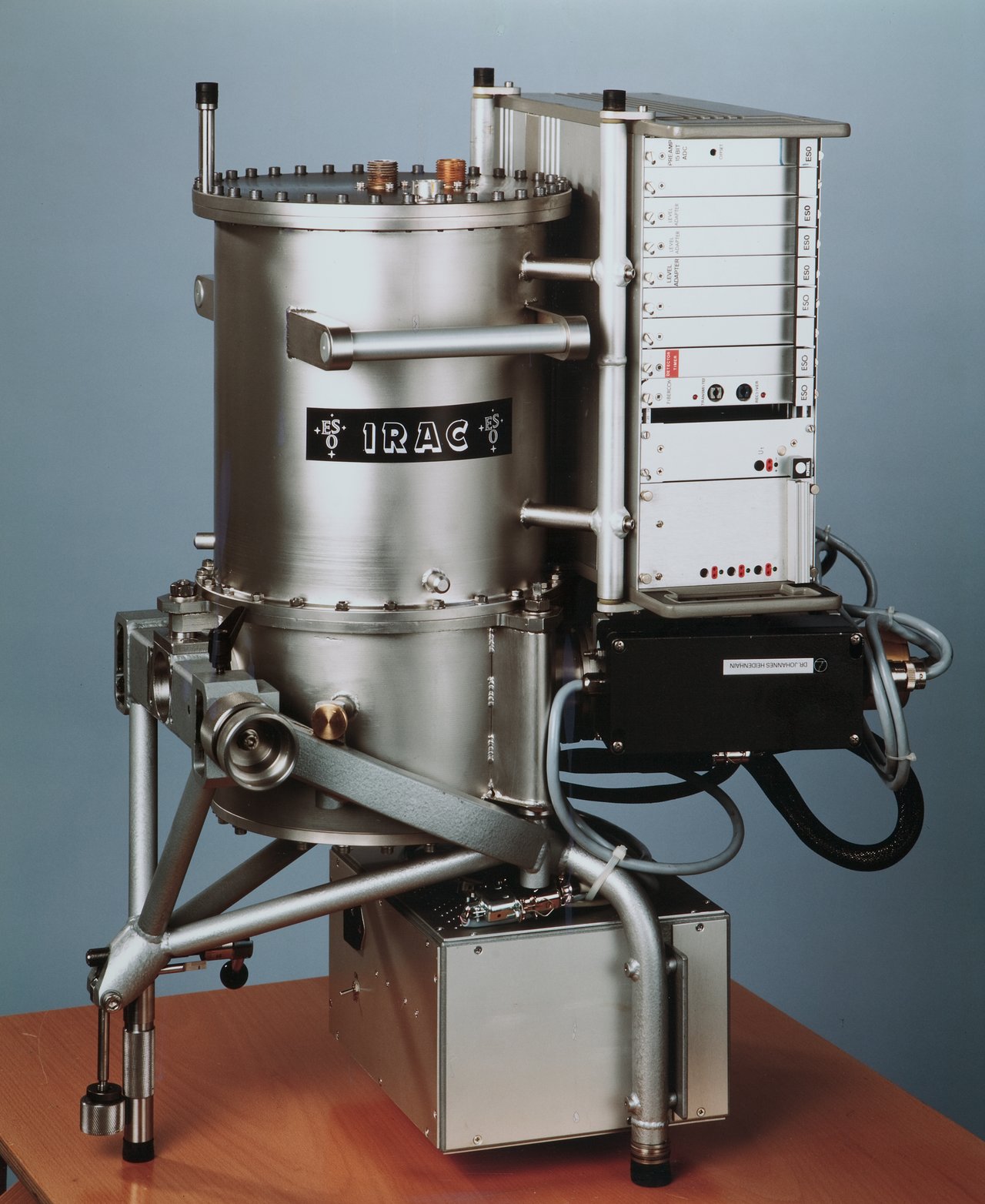 A: The first astronomical research was carried out using the human eye as a detector of light. Then in the 19th century astronomers started using photography to record astronomical images. Nowadays we use electronic detectors, which convert light into electrons to produce images and spectra. Detectors are found in all the instruments of ESO’s telescopes and almost all of these have been developed in house. One of ESO’s areas of expertise is in detector controllers which operate the detectors. We have created our own controller, the NGC controller, which can work with all of the detector systems. This is a big advantage over other observatories that use lots of different controllers from different companies — a nightmare regarding maintenance!

Q: Is there anything you’ve worked on during your time at ESO that you are particularly proud of?

A: I am really proud of initiating electron avalanche photodiode (eAPD) detector technology. When a photon enters an eAPD, it creates an electron which is accelerated to generate an avalanche of fast-moving electrons that are more easily detected than a single electron. eAPDs outperform any other high-speed sensor technology in terms of sensitivity and they are now used worldwide! Five eAPDs are installed on the GRAVITY instrument in the Very Large Telescope Interferometer (VLTI), allowing it to peer into the galactic centre and precisely measure the positions and movements of stars. GRAVITY has even helped reveal the effects predicted by Einstein’s general relativity on the motion of a star passing through the extreme gravitational field near the black hole at the Milky Way’s centre. And it has led to more amazing discoveries soon to be announced.

The Max Planck Institute for Extraterrestrial Physics (MPE) really understood what could be gained with this technology so I would like to thank them for all their support. The company manufacturing the arrays of eAPDs is called LEONARDO, and I would like to thank Adrian Russell, Director of Programmes at ESO for funding several production runs at LEONARDO. It is thanks to a collaboration between several partners that we have been able to develop this completely new technology.

What is great about ESO is that there are people who are truly experts in their field, who love their job and who are very competent.

A 320 x 256 pixel eAPD array as used in the GRAVITY instrument. This detector has revolutionised ground-based astronomy.

Q: How many years have you worked at ESO, and how has ESO changed during your time here?

A: I came to ESO in 1983 and have acquired expertise over time. To avoid becoming someone who knows more and more about less and less until he knows everything about nothing, it is important to communicate with other specialists. In my opinion, what is great about ESO is that there are people who are truly experts in their field, who love their job and who are very competent. There is a lot of support and people are always interested in what you are doing. There has obviously been a lot of restructuring during my time here but these people and their expertise are the backbone of ESO and it’s very nice that this has survived all the changes.

Q: You’ve retired now. Many people would relish the freedom from work but you’ve decided to remain heavily involved in ESO. Why?

A: To be honest, the main reason I chose to continue was for the eAPD technology. It had just been implemented in GRAVITY and I saw that it could be developed further — not only for high-speed sensors that correct the twinkling of stars as their light passes through Earth’s atmosphere, but also for large science detectors. I realised this technology could mark the next step in sensitivity, since many characteristics of eAPD arrays are equal to, or better than, the characteristics of conventional science detectors currently in use. 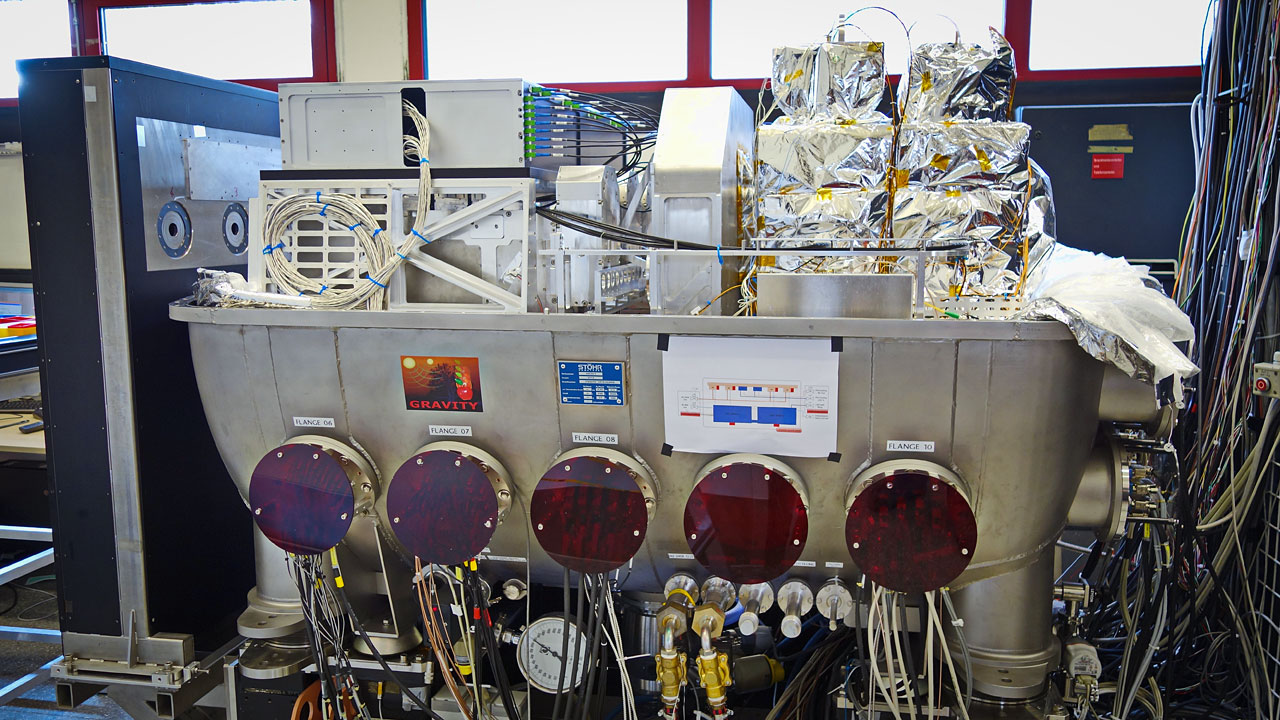 The GRAVITY instrument on the VLT Interferometer.
Credit: MPE/GRAVITY team

GRAVITY is home to Mark#3 detectors, but we’ve recently developed version Mark#14, which shows just how far this technology has come over the last few years! GRAVITY eAPDs collect light with wavelengths between 1.3 and 2.5 microns, but the current eAPD technology is sensitive between 0.8 and 2.5 microns. The VLT’s MUSE instrument needs exactly such a sensor to be able to see more astronomical objects.

A: It’s hard to choose just one moment but a special memory that stands out is when we got IRAC 1 working. This is a cryogenic infrared camera which hosted several generations of infrared detector arrays. Another nice moment was when the ISAAC instrument went to the VLT. At that time, there was no hotel for astronomers to stay in; we lived in containers but it was someone’s birthday so a guitar came out and a party got started. I'm so grateful that there are very competent people to collaborate with at ESO and when I come to them they are always open and we have fun working together.

Q: How do you feel about being known as one of the “fathers” of ESO detectors?

A: What can I say… it’s true that I started with one-pixel detectors and just before I retired I was working with some 4096 x 4096-pixel infrared detectors! I am extremely lucky and happy that my professional career spanned the time during which detector technology developed very, very quickly.

Technology development should be prioritised because it really helps the organisation and astronomy as a whole.

The magical arc of the Milky Way stretches over the Residencia — astronomers’ “home away from home” when they are observing at Paranal observatory.
Credit: ESO/P. Horálek

Q: Is there anything else you would like to mention about your time at ESO?

A: I believe that technology development should be prioritised because it really helps the organisation and astronomy as a whole. ESO is a world-leader in this field and it should make sure it stays there. I also think that it’s incredibly important to make ESO technology available for telescopes belonging to other institutes, and I have always worked hard to ensure that this is the case.

The most important things during my professional life were curiosity, inquisitiveness, communication with experts working in other fields and collaboration with instrument consortia and detector manufacturers.

After growing up in Austria, Gert studied physics at the Swiss Institute of Technology in Zürich, where he obtained his PhD at the Institute of Quantum Optics (former Solid State Physics) investigating the atmospheric terrestrial infrared radiation with a spectrometer on-board an aircraft. Gert’s hobbies include jogging, mountain hiking, skiing and cycling. He finds it important to strengthen our awareness of the environment and to put effort into maintaining the world around us.