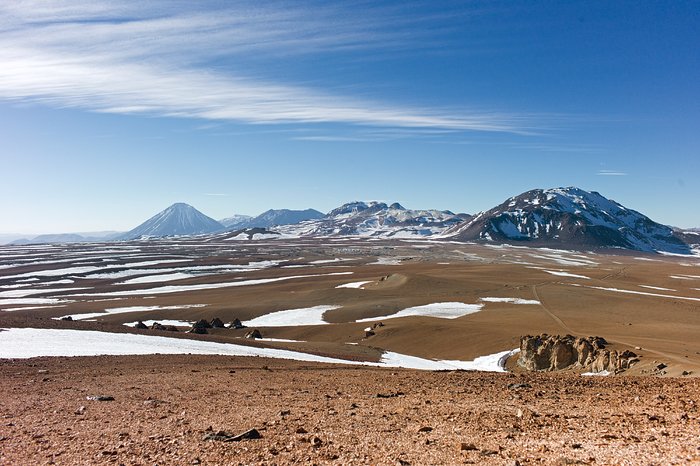 At first glance, this view shows the mountainous scenery of Chile’s Chajnantor Plateau, with snow and ice scattered over the barren terrain. The main peaks from right to left are Cerro Chajnantor, Cerro Toco, Juriques, and the distinctive conical volcano Licancabur (see potw1240) —  impressive enough! However, the true stars of the picture are the tiny, barely visible structures in the very centre of the image — perceptible if you squint hard enough.

These structures, dwarfed by their mountainous neighbours, are the antennas that form the Atacama Large Millimeter/submillimeter Array (ALMA), a large radio telescope. While it may appear minute in this image, the array is actually composed of a collection of large 12- and 7-metre-diameter antennas, and when it’s complete, there will be a total of 66 of them, spread over distances of up to 16 kilometres across the plateau. Construction work for ALMA is expected to finish in 2013, but the telescope has begun the initial phase of Early Science observations, already returning incredible results (see for example eso1239). Since this photograph was taken, many more antennas have joined the array on the plateau.