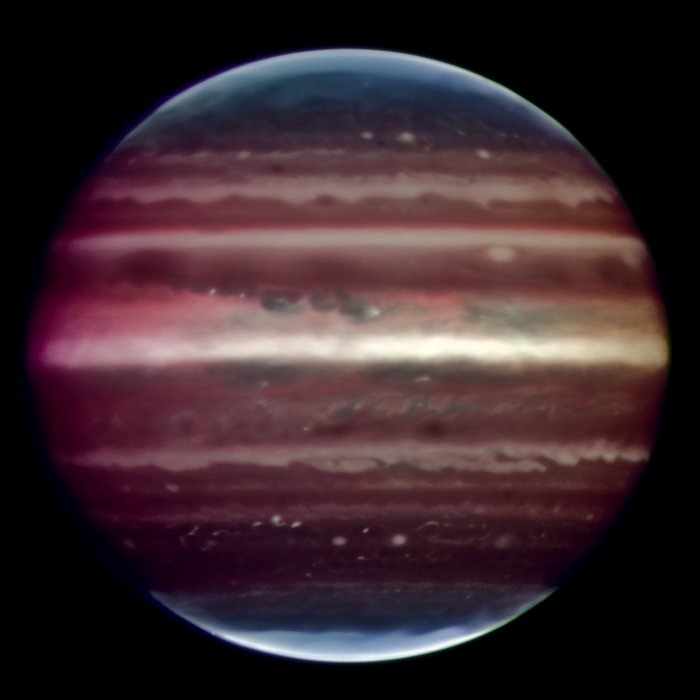 Amazing image of Jupiter taken in infrared light on the night of 17 August 2008 with the Multi-Conjugate Adaptive Optics Demonstrator (MAD) prototype instrument mounted on ESO's Very Large Telescope. This false colour photo is the combination of a series of images taken over a time span of about 20 minutes, through three different filters (2, 2.14, and 2.16 microns). The image sharpening obtained is about 90 milli-arcseconds across the whole planetary disc, a real record on similar images taken from the ground. This corresponds to seeing details about 300 km wide on the surface of the giant planet. The great red spot is not visible in this image as it was on the other side of the planet during the observations. The observations were done at infrared wavelengths where absorption due to hydrogen and methane is strong. This explains why the colours are different from how we usually see Jupiter in visible-light. This absorption means that light can be reflected back only from high-altitude hazes, and not from deeper clouds. These hazes lie in the very stable upper part of Jupiter's troposphere, where pressures are between 0.15 and 0.3 bar. Mixing is weak within this stable region, so tiny haze particles can survive for days to years, depending on their size and fall speed. Additionally, near the planet's poles, a higher stratospheric haze (light blue regions) is generated by interactions with particles trapped in Jupiter's intense magnetic field.