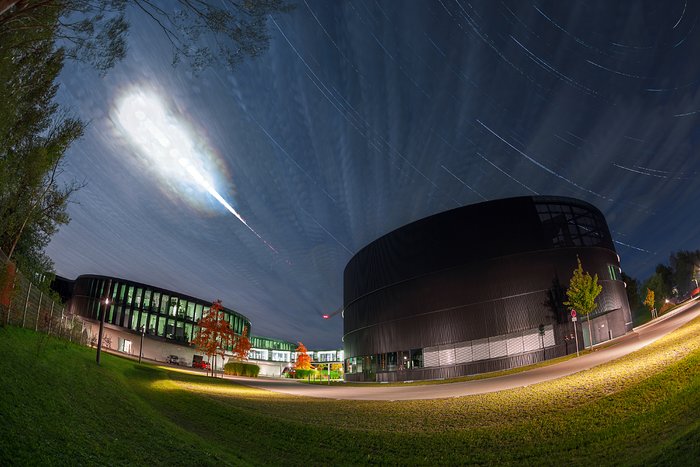 On the morning of Monday 28 September 2015 a spectacular total lunar eclipse was witnessed across Africa, the Americas, Europe and the Middle East. In Germany, it was photographed by Mahdi Zamani above the ESO Headquarters Extension and Technical Building. In this time-lapse sequence the Moon was visible between thin layers of cloud. It appeared bright to the upper-left and faded dramatically as it entered the Earth’s shadow and moved lower in the early morning sky.

A lunar eclipse takes place when the Moon, Earth and Sun are exactly aligned. When the Moon passes through the shadow cast by the Earth, our planet blocks the path of direct sunlight to the lunar surface and a total eclipse occurs. This event can only happen on the night of a full Moon.

This morning's total lunar eclipse took place during a supermoon — a full Moon which occurs at the same time that the Moon is closest to Earth in its elliptical orbit. The combination of the eclipsed Moon being both full and relatively close to the Earth made it look significantly bigger and brighter than usual.

Unlike solar eclipses, the Moon doesn't completely disappear from sight during a total lunar eclipse. Instead it often appears red, giving it the ominous nickname of "blood Moon". The reddish colour is caused by refracted sunlight that has passed through the Earth's atmosphere. Furthermore, most of the blue light is scattered away — the same effect that gives the Sun a red colour at sunset and sunrise.