A Glimpse of the Very Early Universal Web

New, trailblazing observations with the ESO Very Large Telescope (VLT) at Paranal lend strong support to current computer models of the early universe: It is "spongy", with galaxies forming along filaments, like droplets along the strands of a spiders web. A group of astronomers at ESO and in Denmark [1] determined the distances to some very faint galaxies in the neighbourhood of a distant quasar. Plotting their positions in a three-dimensional map, they found that these objects are located within a narrow "filament", exactly as predicted by the present theories for the development of the first structures in the young universe. The objects are most likely "building blocks" from which galaxies and clusters of galaxies assemble.

This observation shows a very useful way forward for the study of the early evolution of the universe and the emergence of structures soon after the Big Bang. At the same time, it provides yet another proof of the great power of the new class of giant optical telescopes for cosmological studies.

The computers are ahead of the telescopes

For the past two decades cosmologists have been in the somewhat odd situation that their computers were "ahead" of their telescopes. The rapid evolution of powerful computer hardware and sophisticated software has provided theorists with the ability to build almost any sort of virtual universe they can imagine. Starting with different initial conditions just after the Big Bang, they can watch such fictional worlds evolve over billions of years in their supercomputers - and do so in a matter of days only.

This has made it possible to predict what the universe might look like when it was still young. And working the opposite way, a comparison between the computer models and the real world might then provide some information about the initial conditions.

Unfortunately, until recently astronomical telescopes were not sufficiently powerful to directly study the "real world" of the young universe by observing in detail the extremely faint objects at that early epoch, and thereby to test the predictions. Now, however, the advent of giant telescopes of the 8-10 metre class has changed this situation and a group of astronomers has used the ESO Very Large Telescope (VLT) at Paranal Observatory (Chile) to view a small part of the early cosmic structure. The telescopes have begun to catch up with the computer simulations.

First Structures of the Universe

All recent computer-simulations of the early universe have one prediction in common: the first large-scale structures to form in the young universe are long filaments connected at their ends in "nodes". The models typically look like a three-dimensional spider's web, and resemble the neural structure of a brain (ESO Press Photo eso0120).

The first galaxies or rather, the first galaxy building blocks, will form inside the threads of the web. When they start emitting light, they will be seen to mark out the otherwise invisible threads, much like beads on a string. In the course of millions and billions of years, those early galaxies will stream along these threads, towards and into the "nodes". This is where galaxy clusters will later be formed, cf. ESO Press Release eso9939. During this process the structure of the universe slowly changes. From being dominated by filaments, it becomes populated by large clusters of galaxies that are still connected by "bridges" and "walls", the last remains of the largest of the original filaments.

New observations with the ESO Very Large Telescope have now identified a string of galaxies that map out a tight filament in the early universe. This trailblazing result is reported by a team of astronomers from ESO and Denmark [1], who have been searching for compact clumps of hydrogen in the early universe.

Hydrogen was formed during the Big Bang some 15 billion years ago and is by far the most common element in the universe. When stars are formed by contraction inside a large and compact clump of hydrogen in space, the surrounding hydrogen cloud will absorb the ultraviolet light from the newborn stars, and this cloud will soon start to glow.

This glow is mostly emitted at a single wavelength at 121.6 nm (1216 Å), the "Lyman-alpha" emission line of hydrogen. This wavelength is in the ultraviolet part of the spectrum to which the terrestrial atmosphere is totally opaque. Accordingly, the Lyman-alpha emission can normally not be observed by ground-based telescopes. However, if a very distant hydrogen cloud emits Lyman-alpha radiation, then this spectral line will be red-shifted from the ultraviolet into the blue, green or red region of the spectrum [2].

For this reason, observations with large ground-based telescopes of Lyman-alpha radiation can be used to identify faint objects forming inside the high-redshift filaments. The team refers to such objects as the LEGO-blocks of cosmology ("Lyman-alpha Emitting Galaxy-building Objects") [3].

Already in 1998, the present team of astronomers obtained very deep images with the ESO 3.58-m New Technology Telescope (NTT) at the La Silla Observatory (Chile) of the sky field around the quasar Q1205-30. The redshift of this distant object has been measured as z = 3.04, corresponding to a look-back time of about 85% of the age of the Universe. Assuming this to be about 15 billion years, we now observe the quasar as it appeared 13 billion years ago, hence about 2 billion years after the Big Bang.

The images were obtained through a special optical filter that only allows light in a narrow spectral waveband to pass. The astronomers chose this wavelength to coincide with that of the Lyman-alpha emission line redshifted to z = 3.04, i.e. 490 nm in the green spectral region. Lyman-alpha radiation from objects at the distance of the quasar - and thus, at nearly the same redshift - will pass through this optical filter. When these images are combined with other deep images taken through much wider red and blue filters, the Lyman-alpha emitting objects at redshift 3.04 will show up as small, intensely green objects, while most other objects in the field will appear in various shades of red, blue and yellow, c.f. ESO Press Photo eso0120.

The spatial distribution of the galaxies

Thanks to the great light-gathering capabilily of the VLT and the excellent FORS1 multi-mode instrument at the 8.2-metre ANTU telescope, spectra of eight, faint Lyman-alpha objects were obtained in March 2000 that allowed measuring their exact redshifts and hence, their distances [2]. When two co-ordinates from the position in the sky were combined with the measured redshifts into a three-dimensional map, the astronomers found that all of the objects lie within a thin, well-defined filament, c.f. ESO Press Photos eso0120 and eso0120.

Speaking for the group, Palle Møller is exhilarated: "We have little doubt that for the first time, we are here seeing a small cosmic filament in the early universe. At this enormous distance and correspondingly long look-back time, we see it at a time when the universe was only about 2 billion years old. This is obviously in agreement with the predictions by the computer models of a web-like structure, lending further strong support to our current picture of the early development of the universe in which we live".

Does this observation change our view of the early universe? No - on the contrary, it confirms the predictions of computer-models about how cosmic structures formed in the early days after the Big Bang.

However, there is still a long way to go before it will be possible to make a more detailed comparison between observations and predictions, e.g., from ESO Press Photo eso0120 to ESO Press Photo eso0120! Asked about what they consider the most important consequence of their observations, the team responds: "We have shown that we now have an observational method with which we may study the cosmic web in the early universe, and the VLT is a great tool for such studies. The way forward is now pretty clear - we just have to find those faint and distant LEGOs and then do the spectral observations from which we may determine how they are distributed in space".

[1] The team consists of Palle Møller, Johan Fynbo (both at ESO, Garching) and Bjarne Thomsen (Institute of Physics and Astronomy, Aarhus, Denmark).

[2] In astronomy, the redshift denotes the fraction by which the lines in the spectrum of an object are shifted towards longer wavelengths. The observed redshift of a distant hydrogen cloud or galaxy gives a direct estimate of the apparent recession velocity as caused by the universal expansion. Since the expansion rate increases with the distance, the velocity is itself a function (the Hubble relation) of the distance to the object. The higher the redshift of an object, the more distant it is and the longer is the look-back time, i.e. the earlier is the corresponding epoch.

The research described in this press release is the subject of a scientific article by the team, "Detection of a redshift 3.04 filament", to appear as a Letter to the Editor in the European journal Astronomy & Astrophysics. 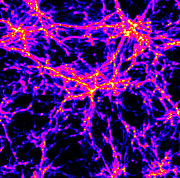 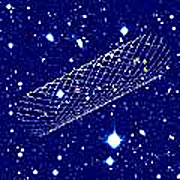 PR Image eso0120d
The shape of the filament 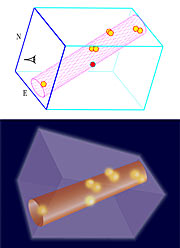 PR Video eso0120a
A Glimpse of the Very Early Universal Web
Send us your comments!
Subscribe to receive news from ESO in your language
Accelerated by CDN77
Terms & Conditions