A spectacular new image of the star-forming Carina Nebula has been captured by the VLT Survey Telescope at ESO’s Paranal Observatory and released on the occasion of the inauguration of the telescope in Naples today. This picture was taken with the help of Sebastián Piñera, President of Chile, during his visit to the observatory on 5 June 2012.

The latest telescope at ESO's Paranal Observatory in Chile — the VLT Survey Telescope (VST) — was inaugurated today at the Italian National Institute for Astrophysics (INAF) Observatory of Capodimonte, in Naples, Italy. The ceremony was attended by the Mayor of Naples, Luigi De Magistris, the INAF President, Giovanni Bignami, the ESO representatives Bruno Leibundgut and Roberto Tamai, and the main promoter of the telescope, Massimo Capaccioli of the University of Naples Federico II and INAF.

The VST is a state-of-the-art 2.6-metre telescope, with the huge 268-megapixel camera OmegaCAM at its heart. It is designed to map the sky both quickly and with very fine image quality. The VST is a joint venture between ESO and INAF and OmegaCam has been provided by the OmegaCam consortium [1]. This new telescope is the largest telescope in the world exclusively dedicated to surveying the sky at visible wavelengths (eso1119). The occasion of the inauguration has been marked by the release of a dramatic picture of the Carina Nebula taken with the new telescope.

This star formation region is one of the most prominent and frequently imaged objects of the southern sky. It has been the subject of many earlier images with ESO telescopes (eso1208, eso1145, eso1031, eso0905). However, the glowing gas cloud is huge and it is difficult for most large telescopes to study more than a tiny part of it at once. This makes it an ideal target for the VLT Survey Telescope and its big camera, OmegaCAM. The VST delivers very sharp images because of its high quality optics and the excellent site. But, as it was designed for surveys of the sky, it also has a very wide field of view that can take in almost all of the Carina Nebula in a single picture.

This object was a natural target when the President of Chile, Sebastián Piñera, accompanied by the First Lady, Cecilia Morel, were distinguished guests at the Paranal Observatory on 5 June 2012 (eso1223) and participated in observations with the VST. The picture that the President helped to take on this occasion has now been combined with other recent VST images of the Carina Nebula to produce one of the most richly detailed and colourful views of this object ever created.

The Carina Nebula is a huge stellar nursery lying about 7500 light-years from Earth in the constellation of Carina (The Keel) [2]. This cloud of glowing gas and dust is one of the closest star formation regions to the Earth and includes several of the brightest and most massive stars known. The Carina Nebula is a perfect laboratory for astronomers studying the violent births and early lives of stars.

The conspicuous red colour of the picture comes from hydrogen gas in the nebula that is glowing under the harsh ultraviolet light from many young and hot stars [3]. Other colours, originating from other elements in the gas, are also visible, as well as many dust clouds. Just above the centre of the picture lies the bright star Eta Carinae (eso0817). This huge and highly unstable star brightened dramatically in the nineteenth century and is a good candidate for a future supernova explosion.

[1] The VST programme was a joint venture between the INAF–Osservatorio Astronomico di Capodimonte, Naples, Italy and ESO. INAF designed and built the telescope with the collaboration of leading Italian industries and ESO was responsible for the enclosure and the civil engineering works at the site. OmegaCAM, the VST’s camera, was designed and built by a consortium including institutes in the Netherlands, Germany and Italy with major contributions from ESO. The new facility is operated by ESO, which also archives and distributes data from the telescope. For further details please refer to eso1119.

[2] Carina is the keel of the mythological ship Argo, of Jason and the Argonauts fame.

[3] The special filter for observing hydrogen emission was kindly made available by the VPHAS+ Consortium.

PR Image eso1250d
The Carina Nebula in the constellation of Carina

PR Video eso1250a
Zooming in on the Carina Nebula 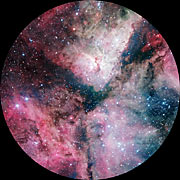 PR Video eso1250c
The Carina Nebula imaged by the VLT Survey Telescope (8k fulldome)
Send us your comments!
Subscribe to receive news from ESO in your language
Accelerated by CDN77
Terms & Conditions