Preparations for future cosmological observations with the VLT

Within a few months, the first 8.2-meter Unit Telescope of the ESO Very Large Telescope (VLT) array will open its eye towards the sky above the Atacama desert. As documented by recent Press Photos from ESO, the construction work at the Paranal VLT Observatory is proceeding rapidly. Virtually all of the telescope components, including the giant Zerodur mirror, are now on the mountain.

While the integration of the telescope and its many optical, mechanical and electronic components continues, astronomers in the ESO member countries and at ESO are now busy defining the observing programmes that will be carried out with the new telescope, soon after it enters into operation. In this context, new and exciting observations have recently been obtained with the 3.5-m New Technology Telescope at the ESO La Silla Observatory, 600 km to the south of Paranal.

How to record the faintest and most remote astronomical objects

With its very large mirror surface (and correspondingly great light collecting power), as well as an unsurpassed optical quality, the VLT will be able to look exceedingly far out into the Universe, well beyond current horizons. The best technique to record the faintest possible light and thus the most remote celestial objects, is to combine large numbers of exposures of the same field with slightly different telescope pointing. This increases the total number of photons recorded and by imaging the stars and galaxies on different areas (pixels) of the detector, the signal-to-noise ratio and hence the visibility of the faintest objects is improved.

The famous Hubble Deep Field Images were obtained in this way by combining over 300 single exposures and they show myriads of faint galaxies in the distant realms of the Universe.

The NTT as test bench for the VLT

ESO is in the fortunate situation of possessing a `prototype' model of the Very Large Telescope, the 3.5-m New Technology Telescope. Many of the advanced technological concepts now incorporated into the VLT were first tested in the NTT. When this new facility entered into operation at La Silla in 1990, it represented a break-through in telescope technology and it has since then made many valuable contributions to front-line astronomical projects.

Last year, the control and data flow system at the NTT was thoroughly refurbished to the high VLT standards and current observations with the NTT closely simulate the future operation of the VLT. The successful, early tests with the new operations system have been described in eso9703.

With the possibility to test already now observing procedures which will become standard for the operation of the VLT, a group of astronomers [1] was granted NTT time for observations of Faint Galaxies in an Ultra-Deep Multicolour SUSI field . This is a programme aimed at the study of the distribution of faint galaxies in the field and of gravitational lensing effects (cosmic mirages and deformation of images of distant galaxies caused by the gravitational field of intervening matter). SUSI (SUperb Seeing Imager) is a high-resolution CCD-camera at the NTT that is particularly efficient under excellent sky conditions.

The observations were fully defined in advance and were carried out in service mode from February to April 1997 with flexible scheduling by a team of dedicated ESO astronomers (the NTT team). Only in this way was it possible to obtain the exposures under optimal atmospheric conditions, i.e. `photometric' sky and little atmospheric turbulence (seeing better than 1 arcsec).

A total of 122 CCD frames were obtained in four colours (blue, green-yellow, red and near-infrared) with a total exposure time of no less than 31.5 hours. The frames cover a 2.3 x 2.3 arcmin `empty' sky field centered south of the high-redshift quasar QSO BR 1202-0725 (z=4.7), located just south of the celestial equator.

The frames were computer processed and combined to yield a colour view of the corresponding sky field.

This is indeed a very deep look into the southern sky. The astronomers have found that the limiting magnitude (at a signal-to-noise ratio of 3) is beyond 27 in the blue and red frames and only slightly brighter in the two others. Magnitude 27 corresponds to a brightness that is 250 million times fainter than what can be perceived with the unaided eye. Although not as deep as the Hubble Deep Field due to the shorter exposure time and brighter sky background (caused by light emission in the upper layers of the terrestrial atmosphere), this new set of data is among the best ground-based observations of this type ever obtained.

Galaxies down to a magnitude of roughly 25 will soon be targets of detailed spectroscopic observations with the VLT. They will provide a measure of their basic physical parameters like redshift, luminosity and mass.

This scientific program aims at the study of the photometric redshift distribution of the faint galaxies [2] and of gravitational lensing effects (cosmic mirages). It has been decided to make the complete data set available to the wide scientific community and it is expected that many astronomers all over the world will want to perform their own investigations by means of this unique observational material.

A full description of the project is available on the ESO Web at THE NTT SUSI Deep Field. Here you will find a comprehensive explanation of the scientific background, details about the observations and the data reduction, as well as easy access to the corresponding data files.

[2] The photometric redshift method allows to determine an approximate distance of a distant galaxy by measuring its colour, i.e., its relative brightness (magnitude) in different wavebands. It is based on the proportionality between the distance of a galaxy and its recession velocity (the Hubble law). The higher the velocity, the more its emission will be shifted towards longer wavelengths and the redder is the colour. Recent investigations of galaxies seen in the Hubble Deep Field have shown that the redshifts (and thus distances) found by this method are quite accurate in most cases. 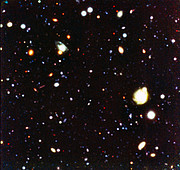 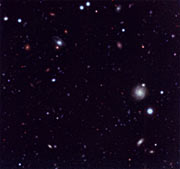