An Introduction to GPU Computing for Astronomy

In this tutorial, we will introduce the basics of GPU programming, including astronomy-related demonstrations of how to use the CUDA and OpenCL programming libraries. By the end of the tutorial, participants should be in a better position to answer the question: Will GPUs help me with my computational problem?

Dr. Gernot Ziegler is an Austrian engineer with a PhD in Computer Science from University of Saarbrücken, Germany, and an MSc degree in Computer Science and Engineering from Linköping University, Sweden. He pursued his PhD studies at the Max-Planck-Institute for Computer Science, where he specialized in GPU algorithms for computer vision and data-parallel algorithms for spatial data structures. As a member of NVIDIA's Developer Technology (Compute) team, Gernot consults in high-performance scientific computing on graphics processors. 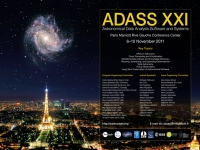