The Galactic Bulge at the crossroads (GBX2018)

The bulge is a primary component of the Milky Way, comprising ∼25% of its mass. All major Galactic stellar populations intersect there, reaching their highest densities. Thus it is truly a crossroads. Current theory suggests that the bulge is the most ancient component of the Galaxy. Therefore, exploring the bulge is fundamental to understanding Galactic formation, structure and evolution.

Indeed, thanks to the advent of multiplexed spectrographs on 8m-class telescopes, and to the availability of resolved, wide-field NIR photometry, our knowledge of the structural, chemical and kinematical properties of the Galactic bulge has improved dramatically in the last few years. At the same time, the interpretation of the accumulated data from this complex region is not straightforward, and many fundamental questions still remain to be answered. E.g. What is the age of the oldest stars? How was the metal-poor spheroid formed? What is the 3D shape of the bulge? What is the connection and interplay between the bulge and bar? Is there a separate bulge globular cluster population? What is the relationship of the central supermassive black hole with the bulge?

Fortunately, this area of investigation is moving forward at a fast pace: since 2013, when the last large international conference on the bulge was organized, progress has been truly impressive. New massively multiplexed spectroscopic surveys (Gaia-ESO Survey, APOGEE South, MOONS), new deeper NIR photometric surveys  (e.g., VVVX, the extension of the VVV Survey) as well as Gaia have recently begun or will begin imminently. Concomitantly, ever more detailed studies of galaxies at high-redshift promise to catch bulges at the time of their formation. A host of exciting new results are thus expected in 2018, and it would be very timely to gather the international astronomical community in late 2018 to present and discuss them, and to begin to establish a consensus on their interpretation. Thus, our understanding of the bulge is also at a crossroads. These intense observational efforts are now matched by the excellent progress in cosmological simulations, which boast better mass resolutions and larger ranges of physical processes, leading to the possibility of very fruitful synergy between theorists and observers that we will promote.

The emerging picture of the present-day bulge is that of an old, spheroidal, metal-poor, and alpha-enhanced population, embedded in a younger, bar-like, metal-rich population showing a declining trend of alpha-elements with metallicity. From a chemical point of view, the latter population resembles the thick disk, so ideas about a common formation of the two structures have been put forward. Observations of extragalactic bulges suggest different channels of formation, but larger samples are needed to establish the preferential bulge formation mechanism. Recent, AO-assisted observations have been able to resolve galaxies at z~2, which apparently show no sign of the presence of a bar. Another question is then if and how the formation and evolution of bars and bulges are linked. Gathering samples of galaxies at even higher redshifts would clearly be a major step forward.

The main sections of the conference are proposed to be the following: 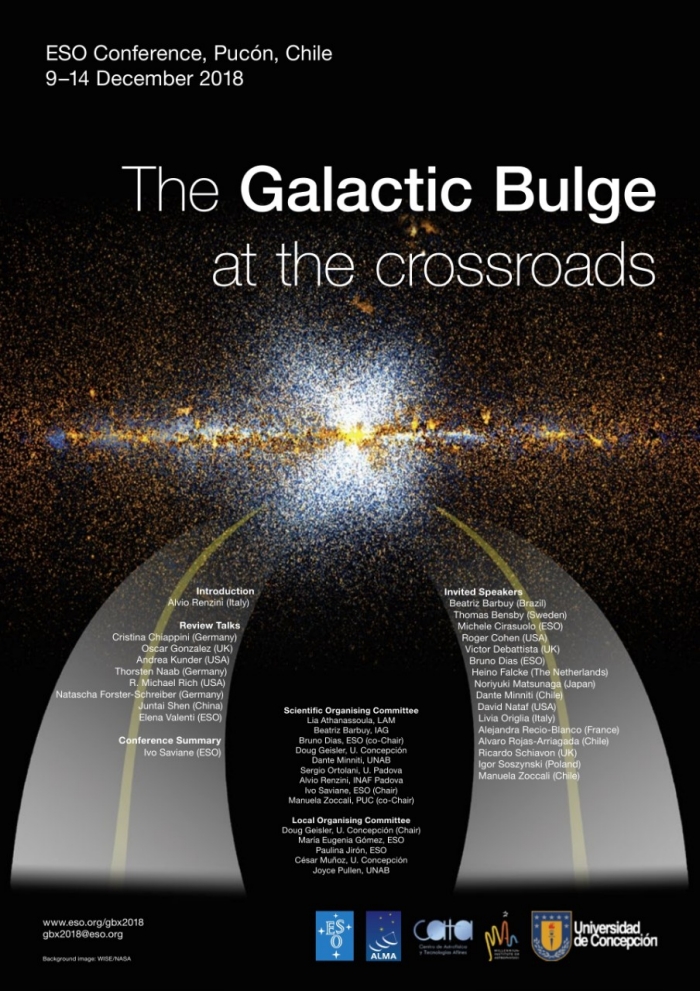