On 2 July 2019 one of nature’s most impressive phenomena will be visible from ESO’s La Silla Observatory in Chile — a total solar eclipse. As these are very rare — the next one visible from La Silla will occur in 212 years — ESO is organising a campaign of observing and outreach activities on site, allowing the general public to experience this spectacular event. Tickets to participate will be available from 13:00 CEST/07:00 CLT on Friday 13 July 2018.

On 2 July 2019, the Moon will cover the face of the Sun, turning day into night in a total solar eclipse covering a 150 km-wide swathe of northern Chile. Thousands of visitors from around the globe will travel to the region to experience this phenomenon against the beautiful backdrop of the dramatic Chilean landscape.

The eclipse will be visible from ESO’s La Silla Observatory in Chile, in the same year in which the observatory celebrates 50 years of operation. To celebrate this unique conjunction, ESO is organising a 2019 Total Solar Eclipse event at the La Silla Observatory on the day of the eclipse. As the eclipse itself will only occur during the late afternoon, the rest of the day will be devoted to many different activities, including tours of the La Silla telescopes, talks and workshops. Viewing the eclipse will depend on weather conditions, which cannot be guaranteed [1].

“On that Tuesday in July 2019, the eyes of the world will turn to Chile, as the Moon will pass between the Earth and the Sun, blocking out the light of our Sun,” explains Claudio Melo, ESO Representative in Chile. “Astronomy and the beauty of the pristine Chilean skies will be showcased to the entire world, as the rarity of the total eclipse will attract thousands of people, from both Chile and further afield, to the north of the country”

ESO and the Cerro Tololo Inter-American Observatory, Gemini Observatory, SOAR Observatory, Large Synoptic Survey Telescope, Las Campanas Observatory, and Giant Magellan Telescope Project are working closely with the Regional Governments of Coquimbo and Atacama, as well as with local institutions. Together, they aim to bring science and astronomy closer to the people of Chile and the wider public during the 2019 eclipse, and to welcome the large number of visitors expected.

Further information about the ESO event is now available online. 300 tickets will be available from the ESOshop from 13:00 CEST on Friday 13 July. The tickets cost 200 euros and include transport from the foot of the La Silla mountain up to the Observatory, eclipse glasses and access to all on-site events and activities. Ticket sales will be on a first-come, first-served basis.

The income from the ticket sales will cover the costs of the event and will help to fund other education and outreach activities, including free access to the ESO sites for selected members of the public visiting that day, among them local Chilean schoolchildren. Visitors from local Chilean schools will attend the event through a special contest in Chile, and a public competition for ESO Member State citizens will be organised. A second edition of the social media gathering #MeetESO will also be organised. Media representatives and other outreach groups will also be attending the event. Further details of activities and invitations to participate will be announced soon on the ESO website.

Together with the scientific community represented by SOCHIAS, CONICYT and the Chilean universities, the Observatories are committed to promoting the 2019 Total Solar Eclipse, bringing science and astronomy closer to the public of Chile and the world, and raising awareness of the importance of protecting dark skies in Chile. A campaign of events will take place during the year leading up to the moment of the eclipse, including public talks, exhibitions, online material and exciting social media and school competitions whose winners will be invited to visit one of the Observatories.

Total solar eclipses are rare phenomena, occurring on average once every 360 years at any specific location. This is the opportunity of a lifetime for astronomy enthusiasts or for anybody wishing to witness a truly dramatic astronomical event.

[1] It is important to note that the La Silla region offers excellent observing skies, but that no guarantees can be made that the weather cooperates. Weather statistics are available here. The event, including talks, tours and workshops, will take place even in the case of adverse weather. If the event needs to be cancelled for safety reasons, tickets will be fully refunded. 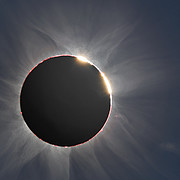 PR Video eso1822d
The dark side of the Earth

PR Video eso1822i
The path of totality for the total solar eclipse of 2231
Send us your comments!
Subscribe to receive news from ESO in your language
Accelerated by CDN77
Terms & Conditions