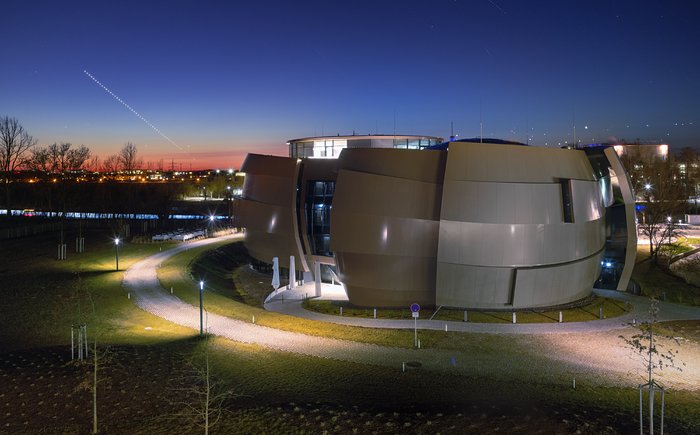 As dusk falls, lampposts gently illuminate the curves and angles of the ESO Supernova Planetarium & Visitor Centre. Treetops are silhouetted against the fading red glow stretching along the horizon, while artificial lights cast bright pools and carve out shadowy corners, creating an atmospheric setting around ESO’s Headquarters in Garching, Germany.

The diagonal line of bright dots streaking across the sky shows the planet Mercury, which was named after the Roman messenger god. Its path is captured in multiple exposures: about 60 images taken over the course of an hour. Mercury is normally a very difficult planet to observe, largely owing to its proximity to the Sun, whose brightness easily obscures it. Seeing it from a city is especially difficult owing to light pollution.

However, on this occasion, several factors conspired to allow ESO photo ambassador Petr Horálek to capture these shots: the night was especially clear; it was just two nights before Mercury reached its greatest eastern elongation, or greatest angular distance from the Sun with respect to Earth; and the planet appeared high in the sky after sunset.

Another way to spot the Sun’s closest planet is when it transits. This will next take place on 11 November 2019. This is a very rare occurrence, and the next such transit will not occur until 2032!