This page contains an explanation of the history effect for biases taken with the new CCD "Carreras" from May 25 2008 - Jul 10 2008 plus the old CCD "Bruce".

The bias calibrations for GIRAFFE are normally taken in a sequence of five. It was noticed that the first bias in this sequence would often have a lower flux than the subsequent four bias images by up to 2 ADU. When processed by the GIRAFFE pipeline the master bias created from all 5would often be too high, regarding in negative fluxes for weak objects.An example is shown below that displays the first in the series taken on2008-06-01T14:54:01.336 subtracted from the second in the series which was taken on2008:06:01T14:54:49.440 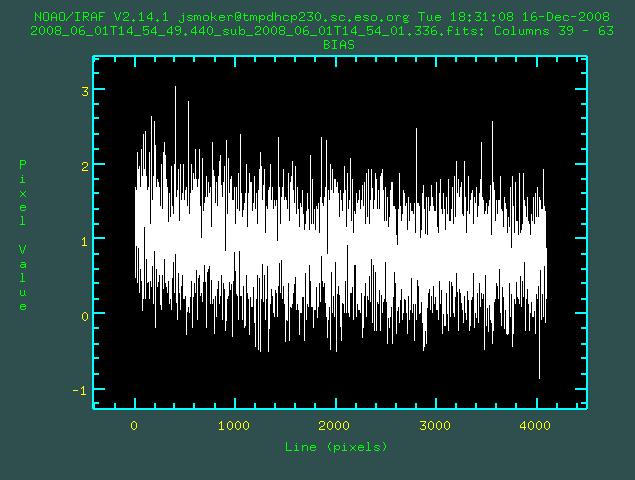 Note that in this case there was about a 1-ADU difference between the first and second biases. In order to avoid this problem affecting the reduced data we note thatall service-mode observations have been re-reduced using the bias option "PROFILE" that uses the pre/overscan information and not the master_bias. We also note that since July 07 2008 then a 2-minute "wait" has been inserted between the bias frames in the sequence. With this gap then the history of all biases should be the same and the effect is no longer seen.Finally, the effect was also present in the old CCD (Bruce), but at a lower level, for example an amplitude of about 0.3 ADU is measured within the daily series of 5 consecutive biases obtained as part of the Giraffe calibration plan as measured by H. Sana (investigated period : 2007 April - August)

Comments can be sent jsmoker@eso.org