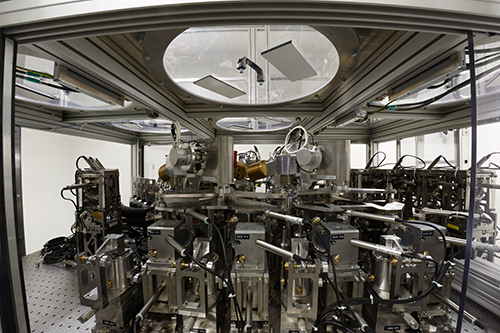 The Multi AperTure mid-Infrared SpectroScopic Experiment (MATISSE) is a second generation instrument operating on the VLT interferometer in the thermal infrared. MATISSE combines the light of four telescopes in bulk optics to record spatially modulated interference fringes in the L (3-4m) and M (4.6-5μm) bands in one and in the N (8-13μm) band in another cryogenic spectrographs. The instrument combines either four UTs or four ATs in standard VLTI configurations.

MATISSE in the so called "stand-alone mode" is coherencing its own fringes, i.e. following slowly the drifts of the fringe pattern introduced by the atmosphere, both in the L/M and N bands. As of Period 106 it is also possible to use GRAVITY as external fringe tracker: so-called "GRA4MAT mode". Using GRA4MAT will improve fringe stabilization for the instrument, allowing longer integrations. Image stabilization is provided by IRIS, the VLTI tip/tilt tracker.

The instrument can be operated in two modes. In the SiPhot (Simultaneous Photometry) mode, part of the light is split off to monitor the photometry of the astronomical object. In HiSens (High Sensitivity) mode, all light is used for the interferometric channel, and the photometric information is obtained directly after the fringe measurements. The typical mode of operations is the HYBRID mode, which means SiPhot in the L/M bands and HiSens in the N band. This choice is mainly driven by the much higher thermal background in the N band, and the need to chop the telescopes to obtain good atmospheric background calibrations.

MATISSE's focus lies on imaging, delivering six visibilities and four closure phases with each observation, but it also provides color differential quantities. A beam commuting device allows to swap beams in the warm part of the optical assembly. This will improve the calibration of instrumental phase effects, allowing the detection of small phase differences, e.g. from planets around their central star.

The length of the MATISSE observing blocks depends on the spectral resolution and whether photometry in the N-band is required. The time needed is between 20 and 35 minutes per object, i.e. a full CAL-SCI-CAL sequence will take between 60 and 105 minutes. For a detailed table see the Instrument Description.

The MATISSE ETC is available to determine visibilities and feasibility. However, signal-to-noise calculations still need to be verified.

The instrument is offered to the community for regular science programme for the first time in P103.

Publications based on MATISSE should cite the following reference paper:

More information can be found on the Instrument Description and in the MATISSE manuals.

Contact addresses related to the MATISSE operations team can be found on this page.