GRAVITY is not a monolithic instrument. It is a collection of sub-systems that aims to precisely control the wavefront of the incoming light and its path through the VLTI system before the actual combination of beams takes place and interference fringes are created.  A unique aspect of GRAVITY, and the first time this is ever realised, is its ability to interfere the light coming from either a single astronomical source (single-field mode or on-axis) or from two sources simultaneously (dual-field mode or off-axis). In dual-field, the GRAVITY system can perform phase referenced observations supported by the accurate knowledge of the path length which is assessed by a laser system. In this mode of observation, the interferometric phase of the primary star is calibrated to that of the secondary against the detrimental influence of the atmosphere. This enables highly accurate angle measurements on sky and is the basis for GRAVITY's astrometric observing mode. In GRAVITY's imaging observing mode, dual-field observations allow to observe relatively faint targets and use a brighter star as the fringe-track star. The difference between the two modes of GRAVITY is the observation strategy and the use of the laser metrology to measure the light-path.

The sub-systems of GRAVITY include:

The overall GRAVITY system interacts and works in harmony with the VLT-I system of telescopes and delay lines. The operation of various GRAVITY sub-systems is transparent to the user. A detailed description of the working principle of GRAVITY with an example on how the system is arranged for on-sky observations can be found in Section 3 of the User Manual.

The single and dual field modes 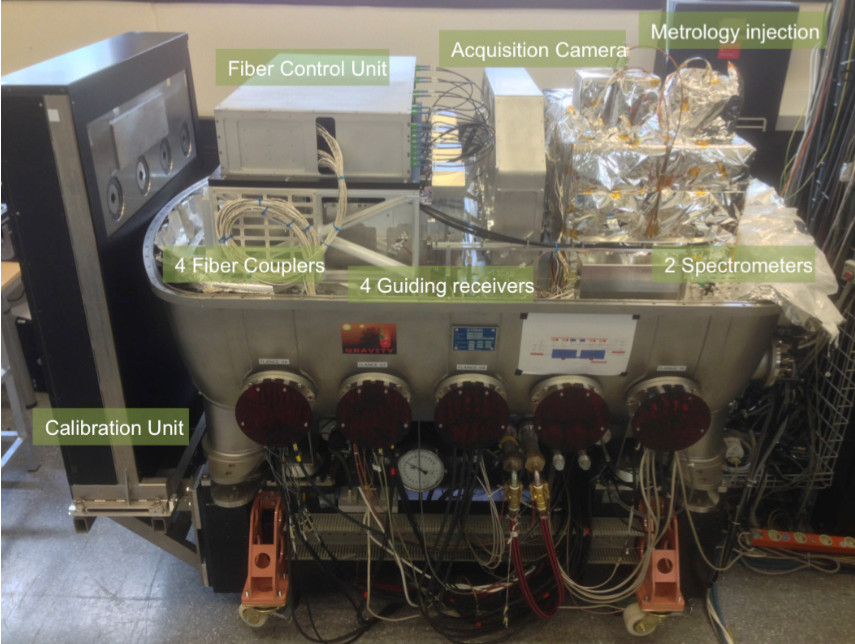 The Beam Combining Instrument (BCI) with its sub-components labelled.

The primary unit of GRAVITY is the Beam Combining Instrument (BCI) that performs the acquisition process and provides the interferometric fringes. The GRAVITY BCI is cryogenically cooled and physically located in the VLT-I laboratory. Within the BCI cryostat, a field is separated and two stars find their way into either the science channel or the fringe-tracking channel. The GRAVITY fringe-tracker (FT) forms an integral part of the observational approach, i.e. GRAVITY science observations are always done with active fringe-tracking. The FT fringe position is analysed at a frequency of approximately a kHz in order to correct for the atmospheric and instrumental piston (i.e. a residual optical path difference between beams) by modulating piezo mounted mirrors within the instrument. The FT star thus allows longer detector integration times in the science channel (SC, up to 60 seconds) without compromising the contrast of the fringe pattern.
In single-field, the FT channel and SC channel receive light from the same star which is split 50%-50% by a beam splitter. In dual-field mode (astrometric or imaging), the fringes of one star are formed in the science channel, and those of the other star in the fringe tracker channel. The two astronomical sources can have an angular separation up to 2'' when observing with the UTs, or 4'' with the ATs. For separations up to 0.27'' and 1.17'' on the UTs and ATs, respectively, the light is split using the beam splitter so that only 50% of the light from each source are injected into the FT and SC channels ("dual-field on-axis"). For larger separations of the two stars, a roof-top mirror is used and 100% of the light of the FT and SC objects reach the respective fibres ("dual-field off-axis"). Starting with P110 GRAVITY "dual-field wide" mode is offered. This mode allows fringe tracking from a target that is up to 30” away from the science target by using the VLTI Star Separators to separate the beams. GRAVITY "dual-field wide" only provides relative measures (differential visibilities, and phases, and phase closures), no absolute visibilities.

GRAVITY delivers spectrally dispersed interference fringes that allow stellar interferometry. The FT spectrometer always operates at low spectral resolution (R ∼ 22). Taking advantage of the longer integration times, the science channel records the entire K-band at each of the three implemented spectral resolutions of R ∼ 22, 500 and 4000. The fringes give access to interferometric quantities such as absolute and differential visibility, spectral differential phase and closure phase. These quantities provide information of physical phenomena at a spatial resolution that can reach 2 mas (depending on the VLT-I baseline), as well as time-resolved differential astrometry at the exquisite accuracy of a few tens of μas.

Astrometry aims at measuring the separation between two targets, whereas phase-referenced imaging aims at measuring the phase of the SC target in reference to the FT target. Both techniques use the dual field mode of GRAVITY and rely on the laser metrology to make the connection between the SC and FT measurements. For astrometry, the metrology measures the evolution of the differential optical path difference as a function of time, which through the interferometer baselines can be converted into a separation between the targets. For phase-referenced imaging the metrology is used to relocate the FT target reference to a separation offset close to the SC target, which helps for producing images. As the laser metrology provides relative optical path measurements only, a metrology zero must be determined for both techniques to work. This determination is typically achieved by swapping a pair of targets (i.e. reversing the sign of the separation), which separates the sidereal metrology signal that changes sign, from the constant metrology zero. When swapping is not directly possible on the target pair of interest, due to a very faint SC target not observable with the FT, the metrology zero determination can be carried out on a more balanced nearby pair. Other than the requirement to calibrate the metrology zero-points, astrometry and phase-referenced imaging observations are similar to dual-field observations and have the same observing constraints.

Whereas the instrument itself is thus perfectly capable of carrying out astrometric and phase-referenced observations, the astrometric part of the GRAVITY pipeline is still under heavy development. The production of separations and referenced phases still rely on custom tools developed by a small group of astrometry-minded astronomers gravitating around the instrument. In addition, the performance of these modes is not fully characterised. Therefore, if you are interested in using and contributing to the astrometric and phase-referenced imaging capabilities of GRAVITY, don’t hesitate getting in touch with gravity-astrometry@eso.org.

The limiting magnitudes currently offered are listed in the two tables below. They cover four turbulence regimes, because the performance is largely influenced by the efficiency of the injection into the fibres. However, for certain targets it may be advisable to set more stringent, intermediate turbulence constraints, e.g. if offset Coudé guiding is required, or if the target is at high airmass (especially because the turbulence constraint is measured at zenith).

Tables 1 and 2 above list the limiting K-band correlated magnitudes offered for observations with the ATs or UTs starting with P110. The following restrictions apply:

More detailed information on the VLTI facility is available in the latest version of the VLTI user manual.