The main purpose of the Mini All-Sky Cloud Observation Tool (MASCOT) is provide to the astronomers an evaluation of the sky quality and its cloudiness, over Paranal Observatory. The idea was to provide a system that would give an entire image of the current sky, with the best possible angular coverage, and with an update rate compatible with cloudiness evolution (i.e. 1 image every 1 or 2 minutes approximately)

The cloud detection method chosen was visible detection, based on a CCD sensor. This method have advantages if it's compared with IR detection like reduced price for the detector, greater spatial resolution, standard wide-angle optics can be used, N2 cooling it's not necessary, and is possible to make light pollution monitoring.

The main specifications of the system are:

The next figure shows the schematic diagram of the system:

Check the Upgrades&News section to the description and information of the new MASCOT version 2.

It's a Genesis 16 Audine camera. Audine is a CCD camera designed by the Association des Utilisateurs de DétecteursElectroniques (AUDE) with the consideration to provide to the amateur astronomers a camera with high performance, and low cost for their observations. Genesis is an enhanced version of Audine, designed by Rick Smith. Both cameras are based on the Kodak KAF-401LE (antiblooming) sensor, and they are cooled using a Peltier.

The camera is controlled by a PC parallel port. Also the signal clocks for the CCD are generated in the computer instead on the camera. 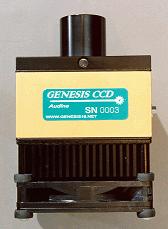 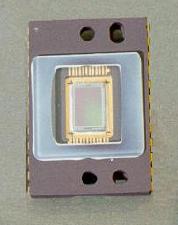 Here is the basic information of the sensor. The datasheet is available on the Documents section.

The quantum efficiency is quite low because the antiblooming feature. It was chosen because to avoidexcessive saturation by brilliant objects (specially the moon).

The digitalization in the camera is made on 32767 levels; the mean value of the bias image is about 3500ADU, with a sigma value of 2.2. 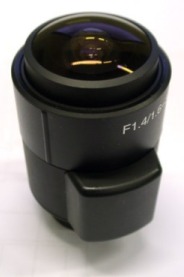 The optics it's a zoom type objective Pelco 13VA1-3. It's a fisheye lens optimized for 1/3" chips and the 180° fits horizontally on a 4.8 x 3.6mm chip; as the KAF401LE sensor is 4.6 x 6.9mm, the 180° image will just be a few degrees oversizedvertically providing ~530 pixels round image. At the center of the image, the pixel scale is 19'/pixel (on 9um pixels) and at the border of the image, the transversal pixel scale is about 6.4'/pixel while the radial one depends strongly on the altitude. As a reference, the theoretical diffraction spot at f/1.6 is about 0.6um.

The back focal distance is about 7mm, and the distance between the sensor and the upper face of its protective window is about 2mm, which leaves a 5mm gap (see figure right below).

The fisheye lens is equidistant type, therefore the angular projection is almost linear and the pixel scale is slightly the same at the center or near the border of the image, i.e. about 19 arcmin perpixel. 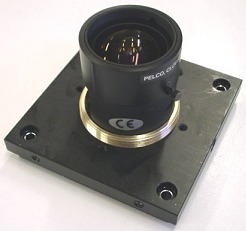 box at ambient temperature. The internal power supply is turned on/off using a commercial crepuscular switch (photocell module). This prevents the camera and Peltier to overheat during the day. A fan allows airflow circulation at day and night. 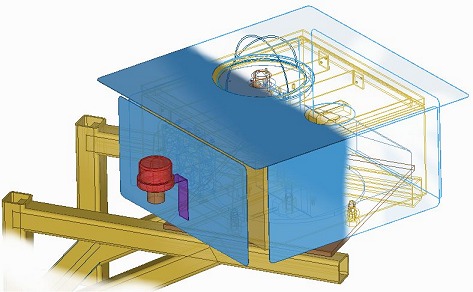 The crepuscular switch also activate/deactivate a protective cap, to avoid ageing effects on the optics due the solar radiation. The motion of the protective cap is provided by a DC motor and a reducer, and two switches stop the opening and closing movements. The cap itself  is made of three metallic bows, one of which is directly linked to the motor axle (the other two remains free). A plastic sheet covers the three bows and makes the protection.

The Genesis camera with its protective cap system