GIRAFFE is a medium-high resolution (R=5500-65000) spectrograph for the entire visible range 370-900 nm. GIRAFFE is aimed at carrying out intermediate and high resolution spectroscopy of galactic and extragalactic objects having a high spatial density. The name comes from the first design, where the spectrograph was standing vertically on a platform. GIRAFFE is equipped with two gratings: high and low resolution.

The grating setups are available in the following links for High Resolution (HR) and Low Resolution (LR).

The two gratings are mounted back to back on a turn-table. Filters are used to select the required spectral range. Each object can be only observed in a single echelle order at once.The light comes from one of the 6 available slits and passes through the order sorting filter. It is then reflected into a double pass collimator and goes to the grating. After an intermediate spectrum is formed, the light is finally re-imaged on the CCD. The spectrograph aperture is F/5 and the beam is 18 cm, i.e., 1.2 arcsec on the sky corresponds to 6 detector pixels. Different wavelengths are obtained by scanning the grating along its rotation axis.

GIRAFFE is equipped with a 2k x 4k EEV CCD (15 µm pixels). The spatial scale is 0.3 arcsec/pixel in MEDUSA, IFUs and ARGUS direct mode. In the enlarged ARGUS mode, the spatial sampling is 0.15 arcsec/pixel. The CCD was provided by the ESO Optical Detector Group.

The GIRAFFE spectrograph and fibre system was developed by the Observatoire de Paris-Meudon (P.I. F. Hammer) and Observatoire de Geneve (P.I. A. Blecha), in tight collaboration with ESO. ESO-Garching is actively responsible for the instrument control electronics hardware and software, the cryogenic system and the detector system (FIERA). The GIRAFFE integration started in ESO-Garching in spring 2001.

The Fiber system feeding GIRAFFE consists of the following components:

Up to 132 separate objects (including sky fibres) can be observed simultaneously in the MEDUSA mode. In this mode, each fibre has an aperture of 1.2 arcseconds on the sky. 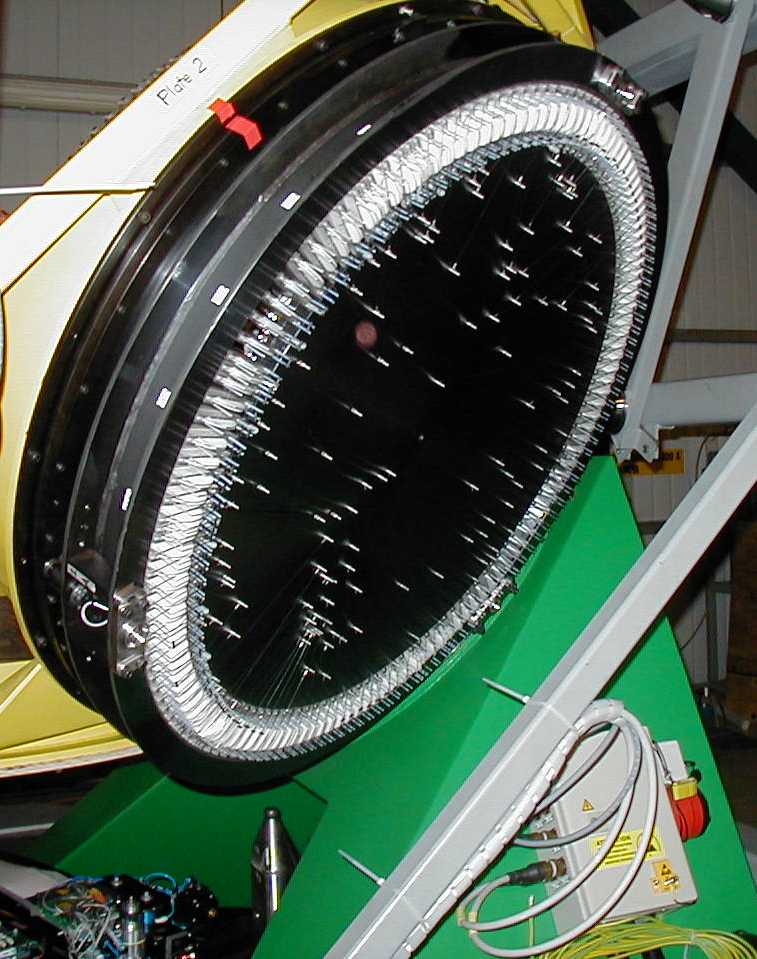 Caption: View of the back of one OzPoz plate where all the fibres are attached with magnetic buttons.

Each IFU consists of an array of 20 square 0.52-arcsec microlenses. The total aperture is almost square (see figure below).

The ARGUS array is a rectangular array of 22 by 14 microlenses (see figure below) which is fixed at the center of one positioner arm. Two spatial scales are available: 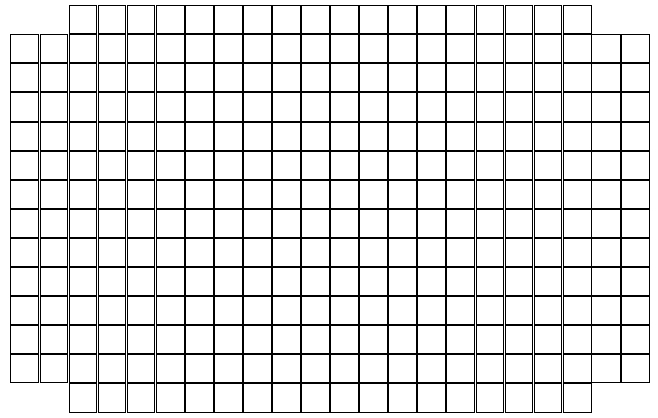 Caption: ARGUS array of 22 by 14 microlenses. Each square pixel is 300 microns wide.

The whole spectral range of GIRAFFE is covered in 32 predefined setups: 24 setups for high resolution and 8 setups for low resolution.

The expected  S/N  for a G2V star has been calculated taking into account the VLT+GIRAFFE performances, a seeing of 0.8 arcsec and a decentering of 0.0 arcsec. A link to theGIRAFFE Exposure Time Calculator can be found here .

The manual of the optical detector system for GIRAFFE is available here: