Since the introduction of VISIR in 2004, mid-infrared detector technology has advanced significantly, and ESO, in collaboration with members of the consortium that built VISIR (CEA Saclay, France and ASTRON, the Netherlands) launched a project to upgrade VISIR and its capabilities. A new detector will be the most prominent upgrade to the hardware providing better sensitivity, stability and overcoming the electronic artifacts. Based on feedback from the user community, it was decided that several other measures to optimize hardware, software and operations will also be implemented as part of the VISIR Upgrade Project.

The main part of the VISIR upgrade project will be the upgrade of its current DRS (former Boeing) 256x256 BIB detector to a Raytheon 1024x1024 pixel Aquarius array. The new detector will offer a larger field-of-view (for imaging), and extended recorded spectral range (for spectroscopy), better cosmetics, and -- especially for spectroscopy -- improved sensitivity. In addition to this main part of the upgrade, several other new features will be implemented:

The VISIR Upgrade Project has succesfully passed it Preliminary Design Review (PDR) and Final Design Review (FDR) in September 2010 and July 2011, respectively. The implementation phase of the project (during which VISIR is unavailable for science observations) started in July 2012, and is expected to be completed by the end of 2014. The post-upgrade VISIR has been offered to the user community for regular science observations from ESO period 95 (April 2015) onwards. Further news about the upgrade project can be found in the News section of this web-page

The initial (engineering-grade) Aquarius array delivered by Raytheon is currently being tested and characterized in Garching using TIMMI-2 as a test facility. Initial results show this detector to have much improved sensitivity and cosmetic quality as compared to the current VISIR detector. 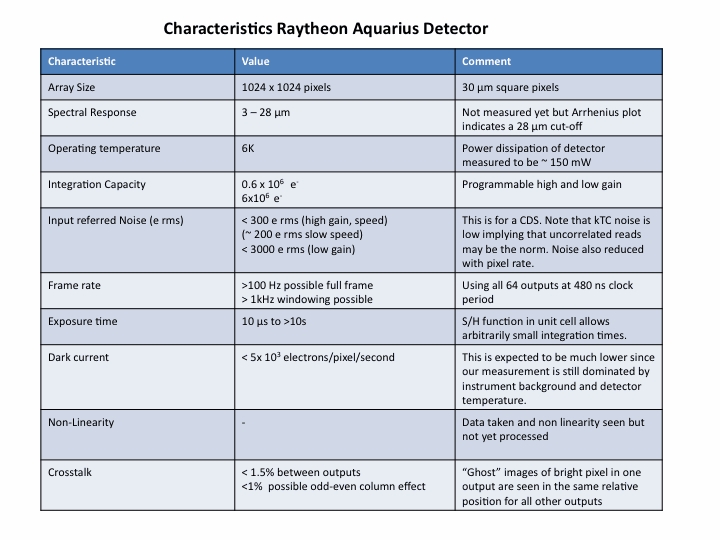 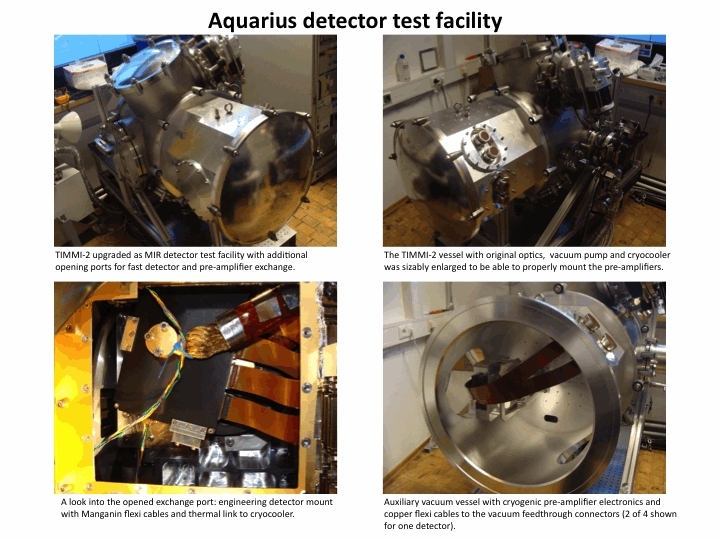 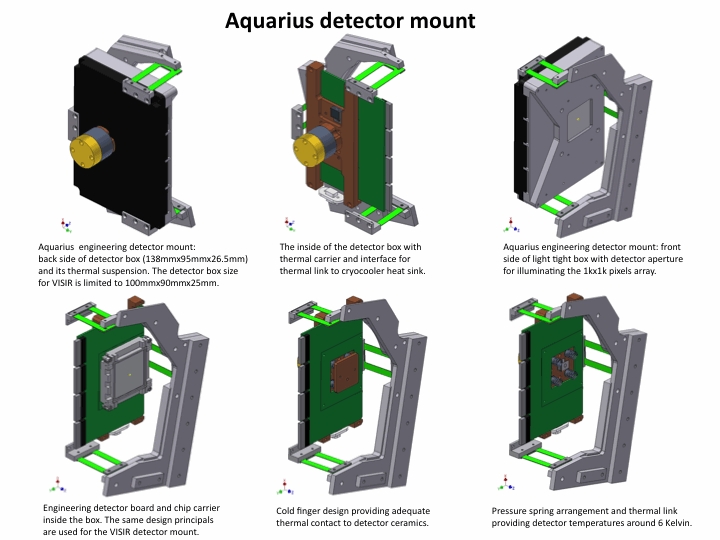 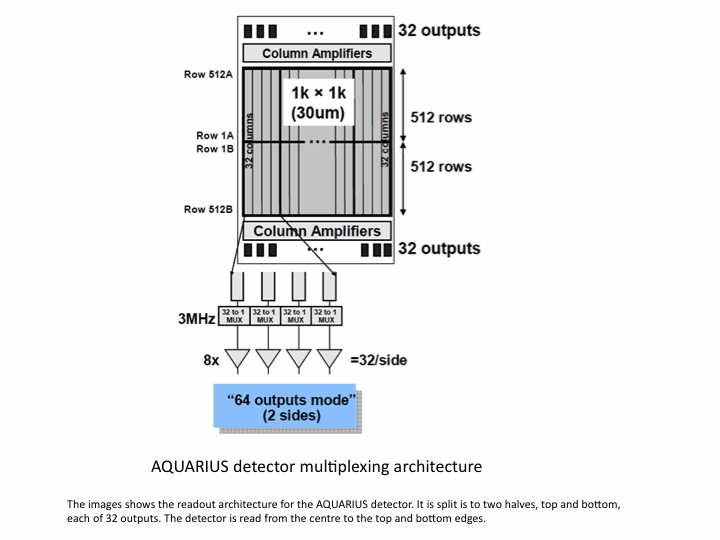 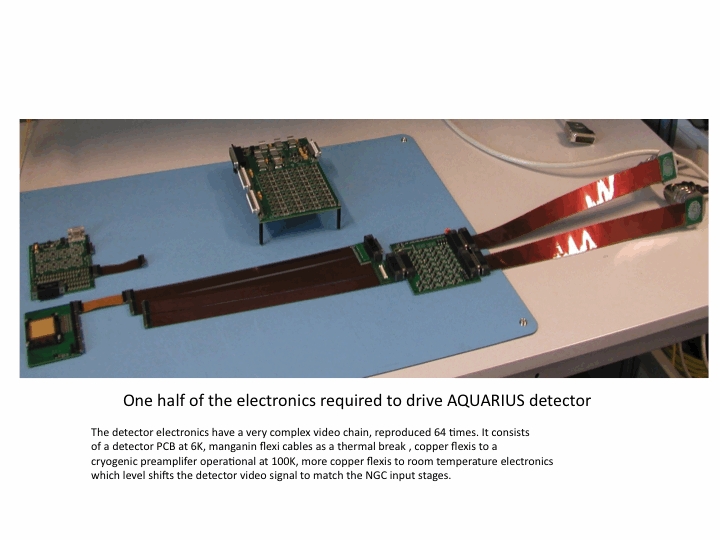 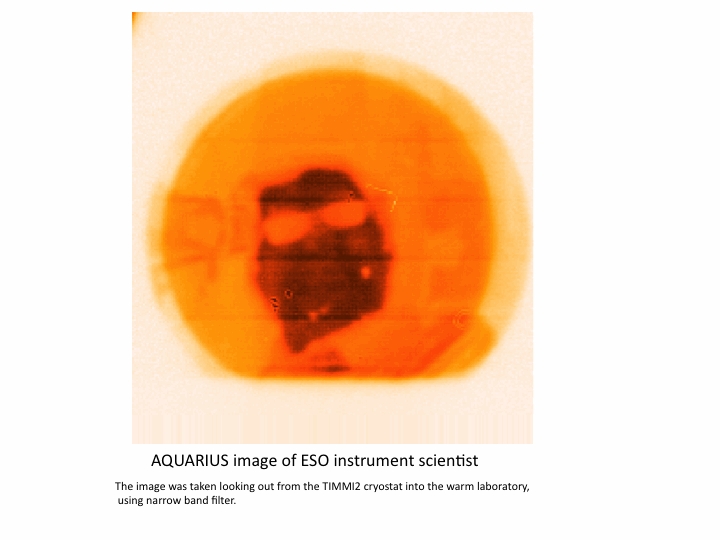 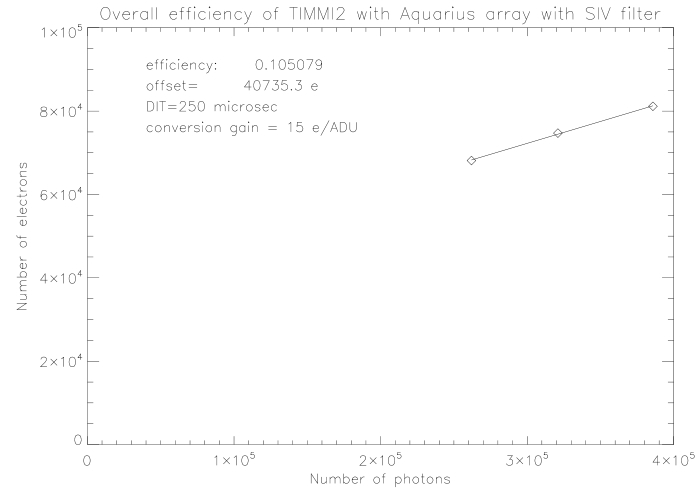 A 183 GHz Precipitable Water Vapour (PWV) monitor has been delivered to ESO by its manufacterer, Radiometer Physics GMBH of Meckenheim, Germany, and has successfully passed Preliminary Acceptance Europe (PAE) after being tested at the UFS Schneefernerhaus (2650 m, below Zugspitze) in the Alps. 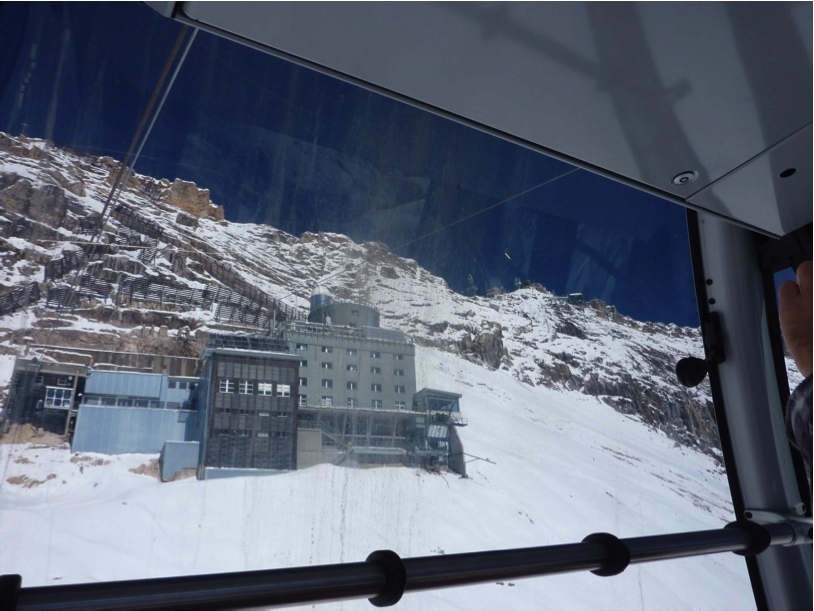 View of the UFS Schneefernerhaus. 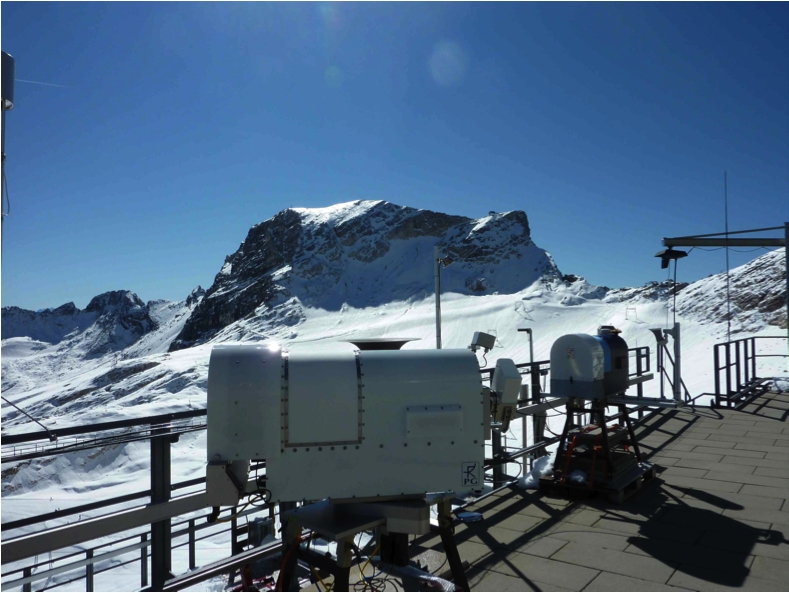 The new Water Vapour Radiometer on the terrace of the UFS Schneefernerhaus.

The Precipitable Water Vapour (PWV) monitor has been installed and successfully commissioned on Paranal! Initial estimates of the performance of the PWV monitor show that it meets all specifications: 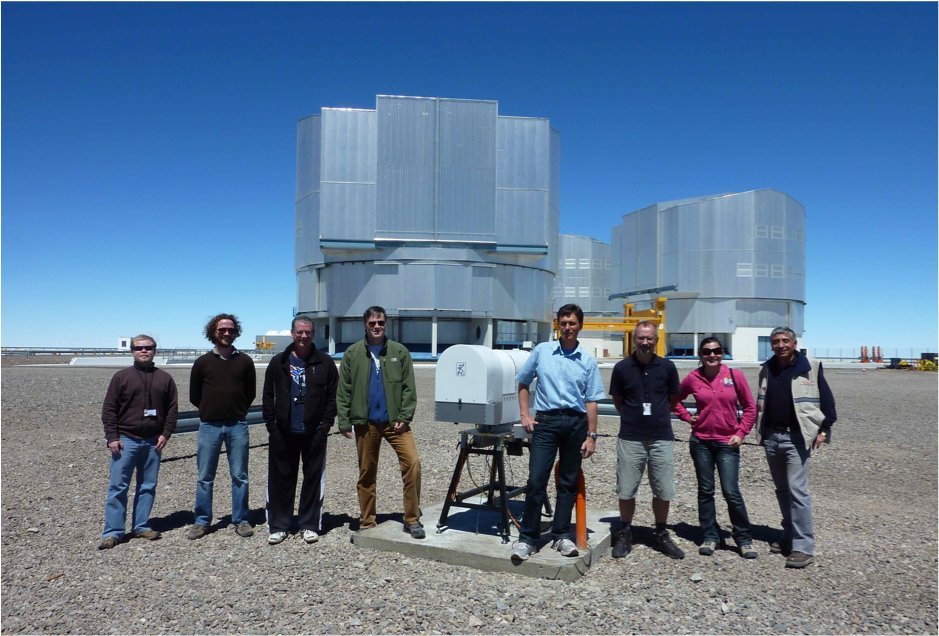 The new Water Vapour Radiometer with the commissioning team in front of VLT UT4 (Yepun). 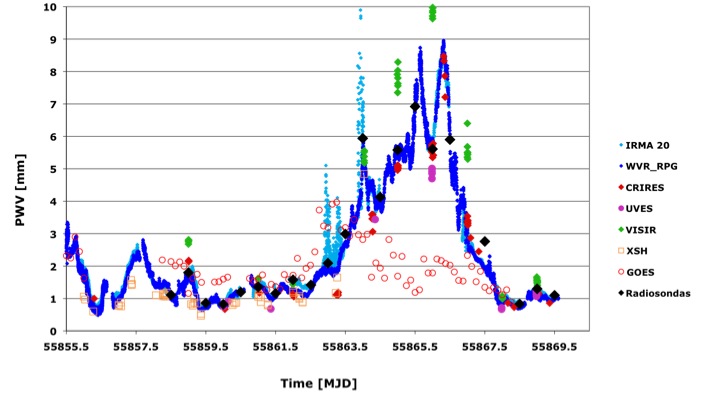 The hardware upgrade of VISIR has started! After passing the shipment readiness review, the new detectors and other components of the hardware upgrade have been shipped to Paranal! The last set of observations on-sky obtained with VISIR in its old state was a set of close-out calibrations (a special set of measurements designed to get a quantitative estimate of the instrument performance before the upgrade) on the standard star HD 178345 on May 9, 2012. Subsequently, VISIR was taken off the telescope and taken to the integration hall where the new hardware will be integrated into the instrument. 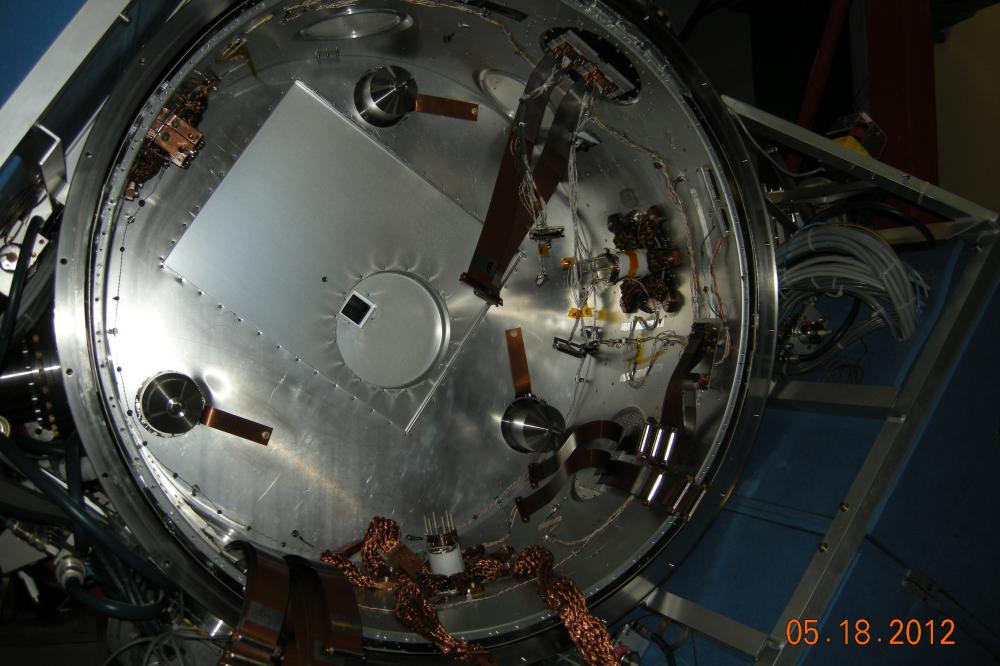 First light has been achieved (in the integration hall) with the new Aquarius detectors assembled within VISIR! 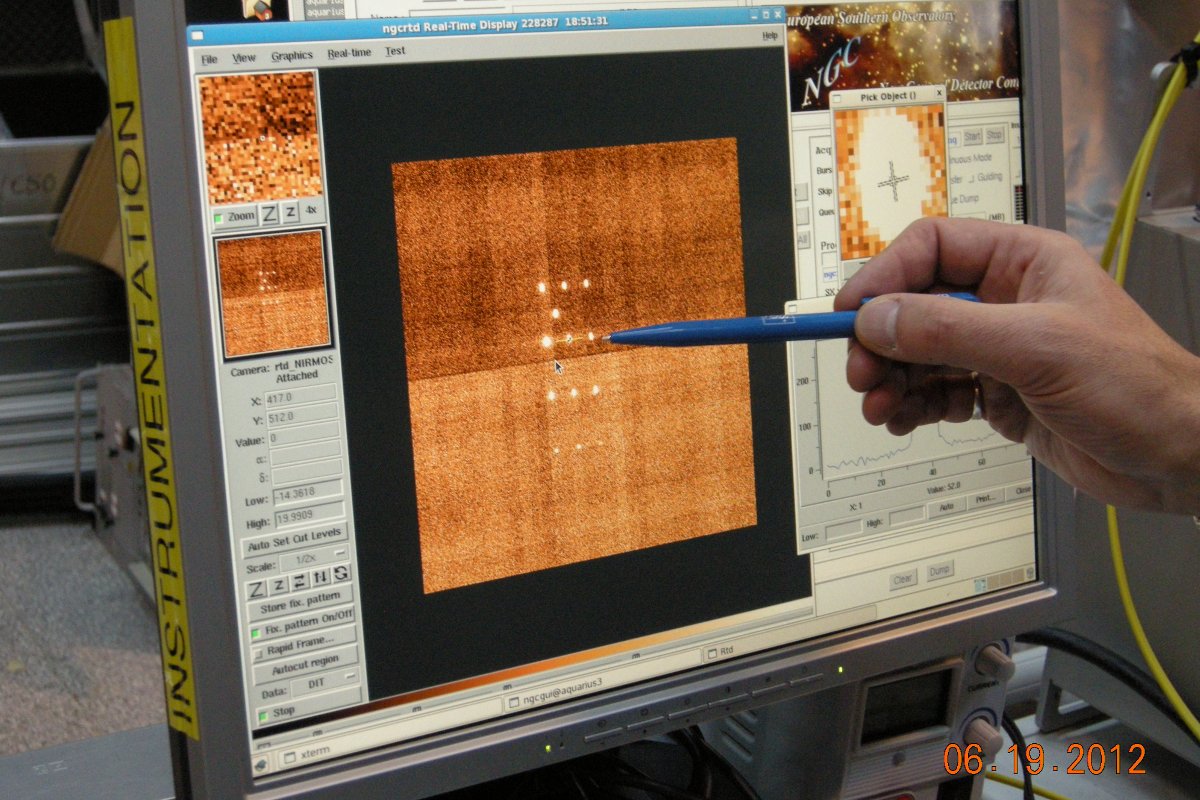 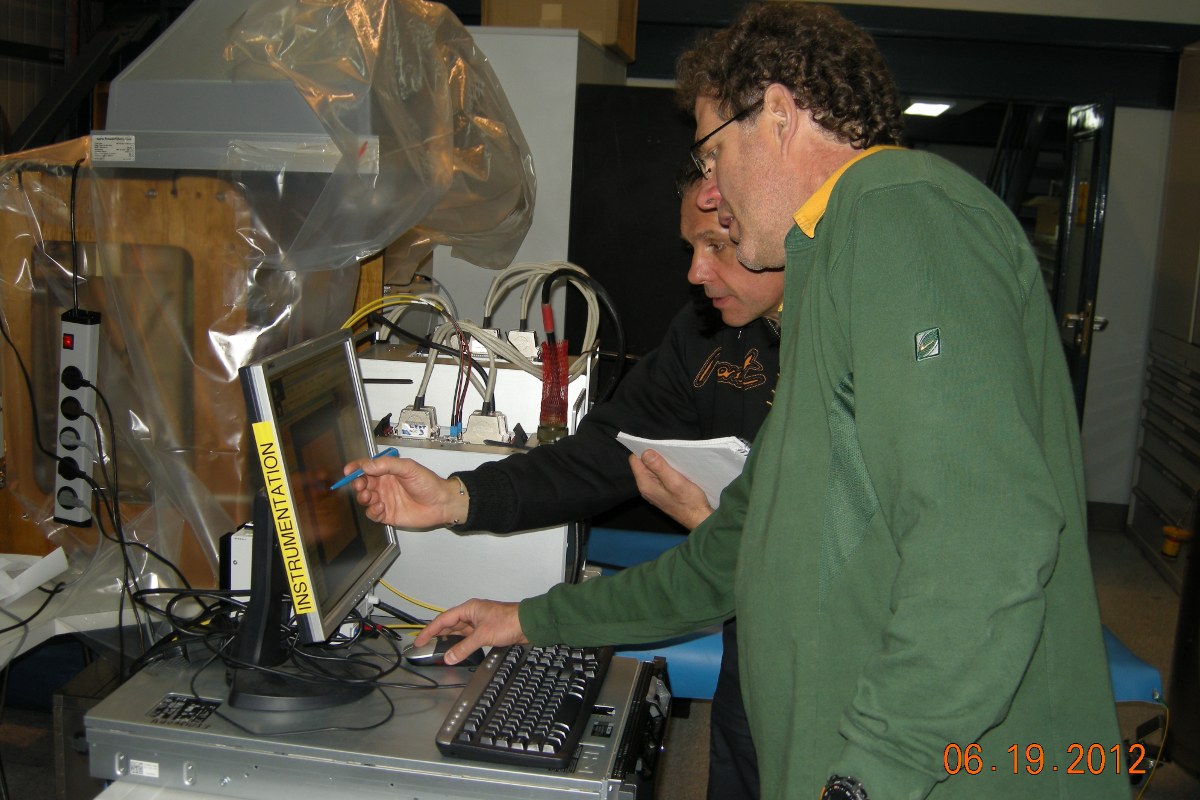 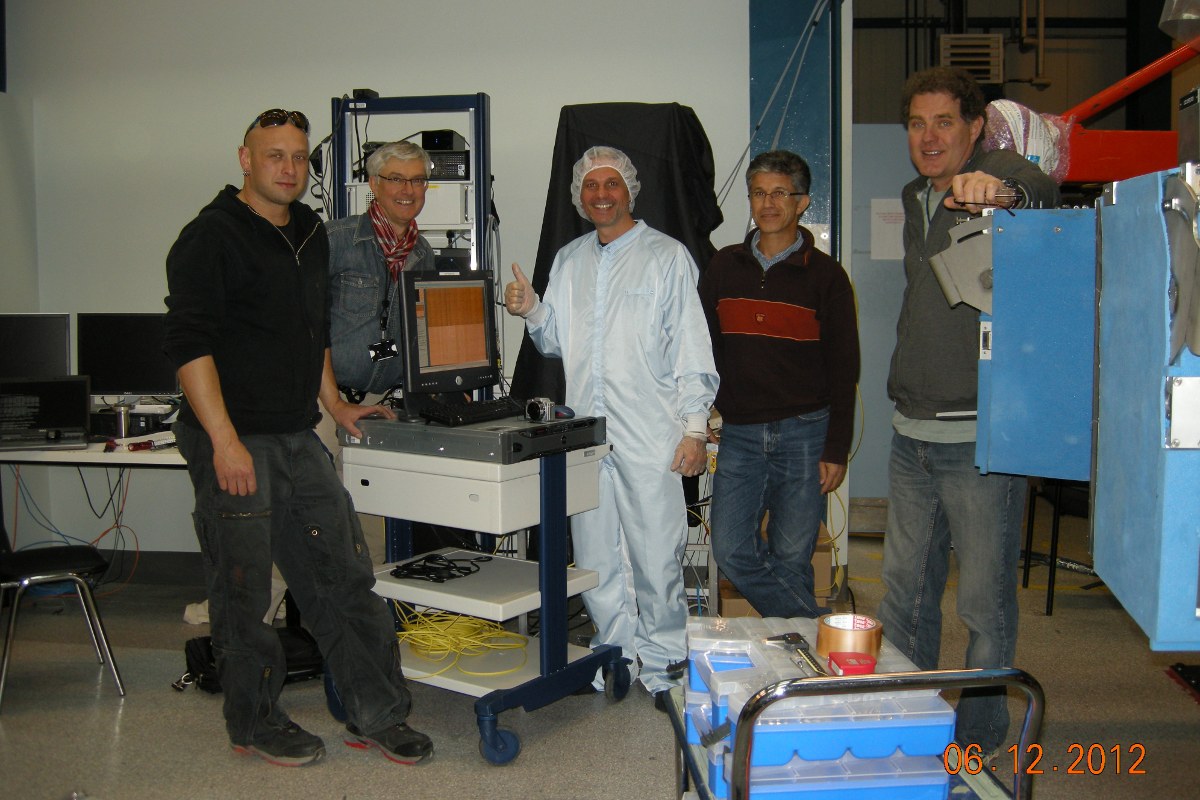 VISIR has been successfully re-assembled, and has been mounted back on VLT UT3 (Melipal). Re-commissioning of the upgraded VISIR will start on July 28th. 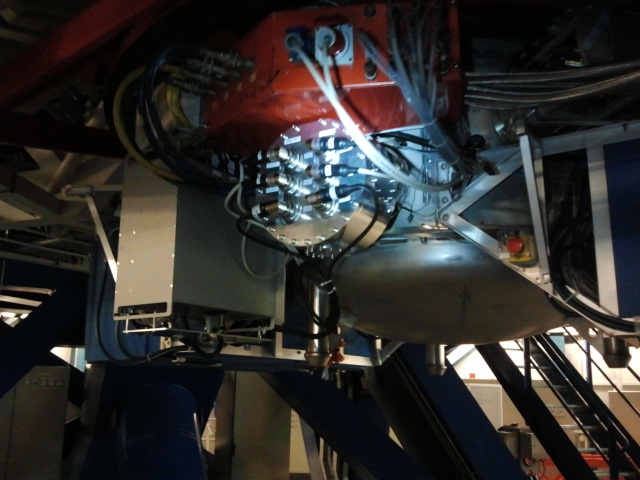 August 1: First light on-sky has been achieved with the new low-resolution prism mode!

August 12: The first VISIR re-commissioning run has ended. The optical quality of the new VISIR is superb, and all modifications including the new prism based low resolution spectroscopy work well. Offline and on-sky tests of the new modes (various flavours of coronagraphy and SAM-imaging) are very encouraging.

However, VISIR is not yet ready for science operations. During the first re-commissioning run there were performance problems of the new Aquarius arrays read-out by the new NGC detector controller. There is no reason to believe that there is a fundamental problem here, but in its present state the instrument does not meet the sensitivity expectations.

VISIR will therefore be dis-mounted from VLT UT3 (Melipal) before the end of August 2012, for further testing. If deemed necessary, the imaging detector may be exchanged before re-mounting VISIR back on the telescope in early September. At present, we expect further re-commissioning activities of VISIR to take place in the bright time period in October. Regular science operations with VISIR are expected to resume at the end of October 2012.

Further testing has confirmed that VISIR's sensitivity after the upgrade is out of specification. Therefore the instrument has been taken off the telescope and various issues are still being worked on in order to properly diagnose the problem and quantitatively characterize the performance parameters. The situation is being analyzed and a short term as well as a long term recovery plan are being drafted. Until the instrument behaviour is fully understood and characterized, VISIR will not be available for operations. This situation is expected to last for the remainder of ESO period 90 (until the end of March 2013). Therefore all VISIR observing runs for ESO period 90 have been canceled.

Work on the VISIR recovery plan is on-going. In collaboration with the manufacturer, ways to mitigate the effects on the final sensitivity of the behaviour of the new detectors in the high-background regime (for imaging) are being studied. In addition, the detector for the spectroscopic arm will be exchanged. No observing time on VISIR will be allocated until the instrument has successfully been re-commissioned. Therefore no VISIR proposals are accepted for ESO period 91 and 92.

The work on the VISIR upgrade is on-going. Modes for single-setting LR spectroscopy from 7 to 14 microns, new science modes for Sparse Aperture Masking and Coronography, and the improvemed observatory operations using a dedicated Particulate Water Vapout (PWV) monitor have all been succesfully implemented. However, on-sky tests performed in August of this year show that the performance with the new Aquarius detectors is still lacking in sensitivity (factor of 2-3 lower than with the old DRS detector). Extensive laboratory testing of the new Aquarius detectors over the course of the last 12 months has shown that the quantum efficiency of the new detectors is fine (around 40%), but that the on-sky sensitivity is severely compromised by the presence of additional correlated noise. The presence of this extremely low frequency noise (ELFN) is intrinsic to Si:As detectors developed by Raytheon and other manufacturers and is not easily avoided in the detector design. Several mitigation efforts to bring VISIR back with improved sensitivity, including faster chopping, drift-scanning, post-processing of the data, and the procurement of new detectors, are being investigated at the moment. As these efforts are on-going, we expect VISIR to be back at the telescope no earlier than mid-2014. Hence VISIR will not be offered for science observations in ESO periods 93 and 94.

The mount of the imaging detector has been modified, and the complete spectroscopic detecter have been replaced, and the functionality of the detectors has been successfully tested in the Paranal New Integration Hall. In addition, new technical CCDs, which allow for faster chopping (expected to mitigate the low frequency noise issue with the new VISIR detectors), have succesfully been commissioned at the VLT. With this, green light has been given to mount VISIR back on VLT UT3 (Melipal) in September/October 2014. Re-commissioning of VISIR is scheduled for early November. For ESO period 95, VISIR will be offered in a limited set of observing modes (regular imaging with the 0.045" pixel scale, low-resolution spectroscopy, and high resolution long-slit and cross-dispersed spectroscopy) only. As at the time that of the release of the ESO Call for Proposals for period 95, the final on-sky performance of VISIR has not been established yet, observers are requested to prepare their proposals using the pre-upgrade sensitivities.

The November 2013 re-commissioning run of VISIR has been completed. The commissioning of the faster M2 chopping with field stabilization has successfully been completed. Chopping up to 5 Hz has been achieved. Guiding and field stabilization is within specifications except for the highest frequencies. Faster chopping has now been demonstrated on-sky to indeed reduce the impact of the low frequency noise associated with the new VISIR detectors. This observed behaviour is in line with expectations based on previous labarotory and on-sky tests. For high chopping frequencies sensitivities better than for the old VISIR have been achieved for a limited set of filters. Further work will focus on confirming these preliminary results, assessing image quality, and advancing towards operational readiness for ESO period 95. The next re-commissioning run for VISIR is scheduled for January 2015.

The January 2015 re-commissioning run of VISIR has been completed. Further improvements have been made to the image quality of VISIR by re-calibrating the parameters for the chopping and field stabilization. Sensitivities in a number of filters were measured under generally variable conditions. The imaging and low-resolution spectroscopy modes have now been fully re-commissionined. Work on the high-resolution spectroscopy and new observing modes (sparse-aperture masking and coronagraphy) will continue in March.